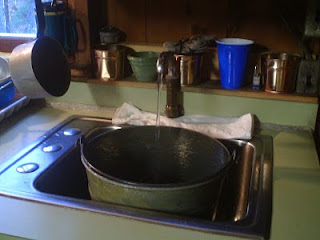 This Ram pump has been working at the Buck Run Camp down the road from me for 38 years. It pumps water by collecting the water upstream and compressing air inside of the bell until enough pressure builds up to release ram and pump water up to cabin. The cabin is at least 20' vertical climb above stream. The water runs continually into the sink as there is no way to turn it on and off. As you can see they keep a bucket in sink to have a reservoir to get larger amounts at once.
It is amazing to watch this pump work in person as the combination of the sound of the stream and the splish, splash of the pump is hypnotizing. Just another way leased camps who aren't allowed to have a well get fresh water free to their camp. Mountain girl, Paula, logging out.
Posted by eaglebear at Thursday, November 25, 2010 No comments: 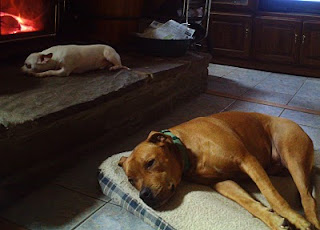 When the nights get cold and the days a bit brisk the dogs move a bit closer to the fire. Speck the littlest one gets a bit too close sometimes and has to make a quick retreat when he starts to smolder.
Thor prefers a softer and safer location from the heat and constant loading of firewood. All the dogs get much quieter when the stove is stoked and the room is almost uncomfortably warm.
It got down to 22 last night and didn't warm up much above freezing today. I will say I have to agree with the dogs that there is nothing like a warm fire on a cold day. Mountain girl, Paula, logging out.
Posted by eaglebear at Sunday, November 21, 2010 1 comment: 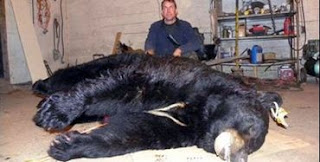 The heaviest black bear ever recorded in Pennsylvania was shot and killed just north of Fernwood Resort in Pike County on Monday.

The Pennsylvania Game Commission confirmed that David Price of Barrett Township killed the 17-year-old bruin, which had an estimated live weight of 879 pounds. The bear had a field-dressed weight of 744 pounds.

Price's bear was 15 pounds heavier than a bear which was killed in 2003 weighing 864 pounds. That bear was also shot in Pike County .

“This bear could be No. 1 in the world,” said PGC Information and Education Supervisor Tim Conway.

After 60 days, the bear's skull will be measured to be determined where it will stand in the record books. The world record skull is over 23 inches, Conway said.

The above was copied from an email I received.

This is the biggest bear I have ever seen. We have had a few shot weighing in the 600lb range around here. Today is first day of bear season. The dogs are always unhappy because they can't go out front. They don't like all the noise and people associated with the bear hunt either. Mountain girl, Paula, logging out. 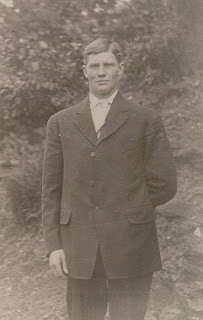 The picture to the left is of Charles John Schwab 1887-1919 born in Leetonia, Pennsylvania. His grandson named after him contacted me through reading the blog and came to Leetonia to see where his grandfather was born and died.

Charles Schwab worked for the lumber yard and loaded the trains with logs. As he was tightening a chain on logs it broke throwing him under the wheels of the train. The train severed his left leg close to his hip and severely crushed his hip. He was being hauled to Williamsport for care but died by the time they reached Cedar Run. Charles John Schwab was latter buried in the Wellsboro cemetery. Just the day before in Leetonia, Jacob Matthews a brakeman for the railroad also had a serious accident crushing his foot. He did however survive his accident. It is a reminder of how perilous working in the logging and railroad business was and still is.

I took the grandson, John, and his wife around Leetonia showing them some of what is left and pointing out where things used to be. Leetonia is a far cry from what it looked like in the days of John's grandfather. The whistle of the train has long stopped, the sound of the lumber mill silent and the smell of tanning fluid gone. But there is something about Leetonia that still stirs the imagination of things past. Sometimes it is so real you think you can hear the whistle and feel the joy and pain of the people who scraped out a living in Leetonia. One of our last stops was at the graveyard. Flags decorating the soldiers graves and a sober reminder that life didn't always make it past childhood as you look at the long line of infant graves up the side of the mountain. It is a bit of a hike up the steep slope of the cemetery and I was asked why didn't they bury people where it was flat? My only answer is flat is a premium space around here and it was generally used for building and work. I guess eternal rest was best in another space. It was also close to the school/church building that no longer exists.