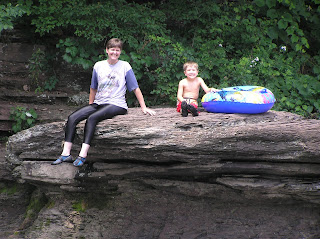 Thanks to Lori-Jo Stoner for this update from Cedar Run. The first picture was taken of myself and grandson in 2006. The part to the left of my leg as you are looking at the picture is now gone.  A large tree smashed into the swimming rock when we had high water. It has broken off two large sharp stones which are right in the area most swimmers jump. Look closely before you jump to avoid injury. Mountain girl, Paula, safety alert.


To see video you will have to go direct to blog and not read from email. Here are the results of a lot of rain coming quickly down this morning on soaked ground. Pine Creek made it up to 5.5 feet at around noon. The Stoners on Pine Creek reported to me they just saw someone floating by yelling holding on to a kayak. Another person in a kayak was following telling them to just let the kayak go. My experience with Pine creek is that anything above 4 foot is for expert paddlers, 3-4 foot is for a good paddler and below 3 anyone can give it a try.  Below 2' best not go far with a boat a tube is really about all that will float that low. Above 6 foot is for fools as usually large trees are floating down with you and dodging debris can be more than a challenge. My rule is if it is chocolate colored...I stay out. It is dropping fast and by tomorrow should be safe again for most causal boaters and swimmers. Mountain girl, Paula, logging out.

John from the Tannery sent me his Mangey Bear picture. As you can see the poor thing looks more like an alien species than a bear. He took this picture when the bear was looking in the kitchen window hoping they would share some of that good smelling bacon. Bears like this if not treated will die when the cold weather comes. If you see one contact the Fish and Game Warden and see if they will trap and treat it. Since mange is very contagious to other bears(it is spread by a small mite that burrows into the hair foliace) controlling this on the bears helps other bears as well. Mountain girl, Paula, logging out.

4th of July in Leetonia

There are a lot of people up to their camps this weekend. It is a big weekend for picnics and outdoor fun. Mother Nature cooperated on the 3rd, but the fourth looks like a chance of rain again. The rain has been so consistent that it has been hard to keep up with the mowing. It seems the sunny days are only for mowing the grass that has burst up from all the rain then it is back to rain. The township parked their mower in our yard for over the weekend as they too have been working on brush chopping the sides of the road. Next week they are closing Leetonia road going South of Leetonia for a couple days to repair a couple of culvert pipes under the road between Leetonia and Fahneystock.  The forest is so green in comparison to winter time it almost feels closed in this year...like living in a cave of green.

The old Ruins Camp is officially changed names to "The Tannery". They posted a very nice sign in front showing the old tannery. So from now on I will only refer to it as the Tannery. According to John at the Tannery, Snagglenose is still around and so is a smaller bear who is very much covered in mange. John thinks it is a second year cub. It made a disturbing look into his kitchen window while they were cooking bacon. The poor thing's entire face and ears were bald and most of its chest. Mange is very spreadable to other bears and the State tries to catch the ones with Mange and treat them or put them under if they have lost more than 50% of their hair. Mange is a cruel death when winter comes as the bears can not stay warm and will end up dying. Here is link to page with Mange bear's picture. Mountain girl, Paula, logging out.