This has been a month for the records. High temperatures have kept most the snow away. We got our first real snow of about 5" last week, which was quickly washed away in the days following with rain. The creek remain high and unfrozen as well. Last week I was able to travel down to Cedar Run on Leetonia road three different days. However, on the last day the temperature dropped from 40 to 32 as I came up and I wished I had not gone that way without chains.
My chains spent a week with UPS as they didn't seem to want to deliver them down a dirt road. Now I have them and feel a lot better if I get stuck in a quick freeze again. Yesterday, we had some weird snow squalls. I was heading north on 287 towards Wellsboro and was met with high winds and blinding snow that accumulated to an inch fast. It lasted for about 5 miles and then was gone as fast as it came and I was back to wet roads only.
Without snow the back roads that aren't winter maintained are extremely unpredictable. It looks good when you start and by the time you realize you are skating on a layer of thin ice it is difficult to stop or turn around. Chains and nerves of steel are a must or best yet go around until we get more snow or it melts completely.
I don't remember a winter like this in the last ten years. I am hoping we are getting a mild winter and not just a late winter. Mountain girl, Paula, logging off.
Posted by eaglebear at Sunday, January 29, 2012 1 comment:

CAUTION!!!! Today Paula drove down Leetonia Road to RT 414 in the Subaru with cable chains. She called me from Slate Run to let me know that she would not be going back that way. The roads are ice covered in most places. Paula said you would have to have ice cleats and nerve's of steel to maneuver on the ice. Maybe a bulldozer would suffice.
It is snowing as of this writing but we are only expecting an inch or so today. Late Friday night a snow system is supposed to be moving in with some (????) accumulation of snow. The snow will help with the layer of ice but it will still be tricky.
Make sure you are prepared if you decide to venture up this weekend. The road is maintained on Leetonia Road from Cedar Mountain Road to Elk Run Road heading towards Route 6. There is also ice on that part of Leetonia Road even with the cinders so take extra care.
The other mountain girl (Lee) signing off.
Posted by eaglebear at Thursday, January 19, 2012 No comments: 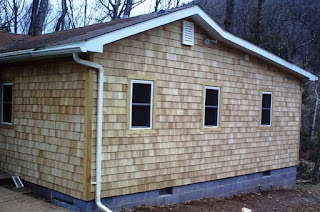 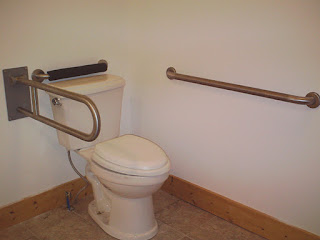 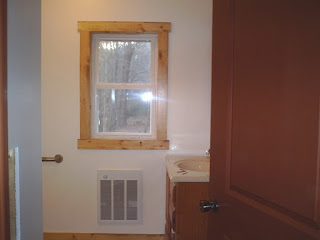 If any of you ever decide to put cedar shingles on a building be aware it is a long slow tedious process. The small amount of shingles shown on this addition took me a week to finish(there is about 8 foot of wall not visible) and the ones you see here cost $600. I must admit they look nice when they are done. The shingles will need a coat of preservative in the Spring.
The inside is getting finished up as well. I installed handicap rails next to toilet. The curved one folds up against the wall, which is nice when you need access to toilet.
Paneling in bedroom should go up fast. But we added another project, putting in a beam between the kitchen and dining area to open it up. I will be finishing that next week due to an unexpected trip to New Jersey today to see my Great Aunt, 96, who is in hospital.
As you can tell from the pictures we have NO SNOW! Also the roads have very little ice on them coming up to Leetonia. So we have been lucky to as far as doing this project so far. A eagle visited me almost every day I did the siding. There are times I complain about the hard work, the aches and pains, but not many jobs come with your own eagle to keep you company. This property has a pretty drastic cliff that drops down to the creek and Scooter loves sitting at the top in the warm sun keeping track of all that goes up and down the creek. It is another sunny day today and this mountain girl is off to the big city, which I don't care for at all. Mountain girl, Paula, logging off.
Posted by eaglebear at Wednesday, January 11, 2012 No comments: 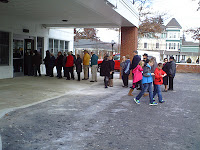 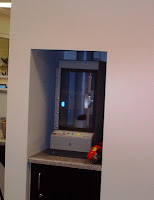 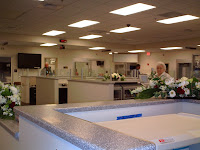 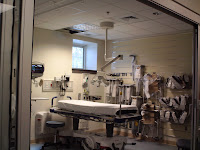 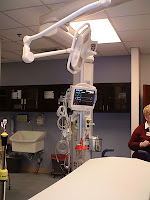 Wellsboro Soldiers and Sailors hospital had a open house of their new emergency room today so Lee and I went. We figured since we were such frequent visitors we wanted to see the new area without an emergency involved. There was a lot of interest as you can see from the line outside the building. The room is scheduled to open at 4 am this Tuesday. I guess that is an low emergency hour. In fact, they said their busiest time is between 3 pm and 11pm daily. So plan your emergencies around that if you don't want company.
It is such an upgrade from the old room; 16 beds, and a division between the trauma patients brought in by ambulance and the walk-ins. A large office space in middle of rooms, which circle the area. A tube transport system for blood and other tests that goes directly to lab. They have all sorts of big screen information boards all over the place so it is very 21st century. It looks like you can pretty much lay in one bed and be examined for just about anything. I can tell you it is much more fun to look at the equipment when you aren't hurt. I am hoping by going there in one piece this counts as my annual emergency visit.

On a sadder note. Longtime resident of Slate Run, Dottie Weber, passed on a couple days ago. She was 89. Her and her husband Bob Weber lived in an non-electric camp in the middle of the mountain far from the regular road. Bob is a retired Forest Ranger and I believe that is why they let him stay at the leased camp. Usually, it is forbidden to make a leased State camp a permanent resident. They couple is well known in Slate Run, I am sure Bob will miss Dottie's company, but no one expects him to leave his piece of heaven soon.

Longtime resident of Leetonia Mick Freed passed away on New Years Eve. Mick was the true Mountain Man in Leetonia and honorary Mayor. He loved this woods and everything in it. Mick’s favorite snack was always ice cream before bed at 8pm. In fact, it was the one thing he would drive through a blizzard to get. I think much of his freezer held this precious commodity he bought on sale during 2 for 1 special.

Winter was one of Mick’s favorite times. Before the road got plowed other than snowmobilers few people came back here. It was time he could take a break from mowing lawns and taking care of cabins to catch up on reading, mostly his westerns. His favorite actor, was John Wayne, whom he had a large poster of on the wall in his cabin.

Mick was a master of being alone in the woods. His wood stacked with care on his porch in such a fashion he could tell you what day of winter it was by looking at what he had used. He snowmobiled in and out dragging a transport sled behind his snowmoble to get groceries. No fancy snowmobile outfit for Mick he wore brown overalls and a winter coat and his helmet or should I say leather cap looked like an old leather football cap. The only time I heard him complain was when his eggs had all broken because of the rough ride.

He helped us a lot the first few years getting to know our way around. After our first winter here, I saw Mick driving down the road.

He yelled at me, “Time’s wasting better start getting firewood!”

After ten years, I realize how right he was. There are two seasons up here: firewood burning season and firewood gathering season and no time in between.

One time when Lee was gone for several weeks and I was alone up here, I thought I would go visit Mick. I snowmobiled down to his house hoping for a conversation. Mick always had his place cooking with a hot fire and something on top the stove cooking. Well, ended up I was the only person talking. All of his answers were one word usually nope or yep. So soon I drove my snowmobile back home and realized he was much better at this hermit stuff than I would ever be.

During the summer months Micky was busy fixing things at cabins and mowing grass. The grass mowing could be an almost constant job if it rained a lot. Mick drove his John Deere lawn mower to most his jobs. It wasn’t uncommon to have to give a little tap on the horn to get around him driving his lawn mower through Leetonia.

As we drove home tonight with the snow falling, I thought of Micky loving this time of year at his cabin reading, sitting by the fire, eating ice cream. We all will miss you Mick, you were one of a kind. Mountain girl, Paula, logging off. 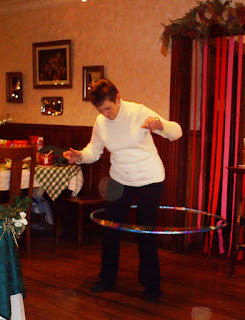 Well, we went to Charlotte's New Year's Eve festivities at the Cedar Run Inn this year. We have about a 50/50 chance of making it downstream as the roads can be icy this time of year. But it was amazingly warm New Year's Eve and New Year's Day. Reaching almost 50 degrees on New Year's Day and the sun coming out to visit until the rain started in the afternoon.
Charlotte gave a try to hula hooping and I got stuck wearing the 2012 glasses. We are all hoping for a more prosperous year for the valley in 2012. So many people just scraping by and most businesses hitting new all time lows.
I worked both days getting some outside work done while the weather cooperated. Today the temperature has plummeted to the twenties and snow is on the way. So looks like we aren't going to be able to stave off winter much longer.
While working my job on over the weekend near Slate Run. I had a visitor. Each day an eagle flew up and down the
creek and sat on a tree not far from me looking for fish. 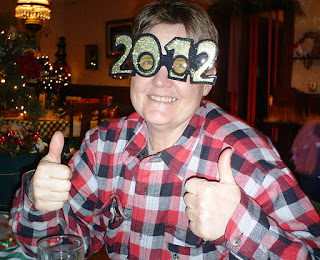 Pine creek is running full with all the rain we have had lately and it looked like the eagle was hoping for a fish or two to make a wrong turn. If no fish, there is always the occasional duck that volunteers for dinner.
It is snowing now and the promise is for a small amount of snow today. However, you never know until it comes what we will end up with. I am enjoying today off as not many of the local lumber yards are open and it seems a nice cold day to stay in and read a book. Have a great Leetonia year to all our friends far and near! Mountain girl, Paula, logging out.
Posted by eaglebear at Monday, January 02, 2012 No comments: