Well, we had 11" of snow last night and I am sure 3 or more inches on top the mountain. The weather is near 32 for highs so the snow is getting heavy fast. It was hard to clear with the four-wheeler. I made it only cause I cleared about 8" last night when it was lighter.
The snowmobilers are out and I am sure it will be a great weekend for them as more snow in smaller amounts is scheduled for the weekend. If you are planing on coming up the only road plowed is from Parker Hollow on Leetonia Rd to the intersection of  Cedar Mountain Rd., otherwise you will be dodging snowmobilers on very difficult roads.
The Chihuahua, Speck, is not at all happy about the deep snow since it is taller than him. He sticks to the plowed areas and Lee Anne's lap or the fireplace most of the day. Whatever you do enjoy the snow...it is more than we had all of last winter.
Mountain girl, Paula, logging out.

Posted by eaglebear at Thursday, December 27, 2012 No comments:

Christmas Day and Storm on the way

I took some pictures of several of the camps on Christmas day few people were up. Things are going to change fast as a big storm is now pumping snow down on Leetonia.
As of 9 PM I have cleaned up 8" of snow and it is still coming down. Saw a couple of snowmobiles, but expect a larger amount in next few days. So far the snow has been light so not too hard to move with the four-wheeler. Of course I had a few mechanical problems that kept me kneeling in the snow to fix. The estimates I have heard are anywhere from 10-15" by the time it is over. This is more snow then we got all last year. I will post some pictures tomorrow when it is all over to let you know the final count. Mountain girl, Paula, wishing you all a Merry Christmas and Happy New Year. 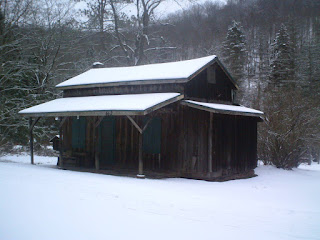 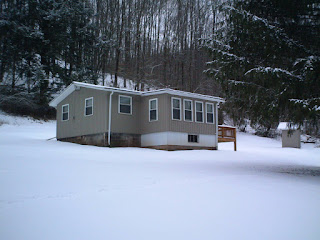 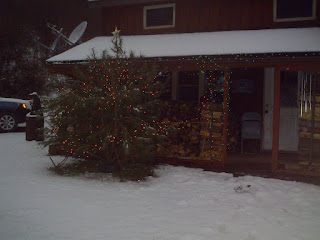 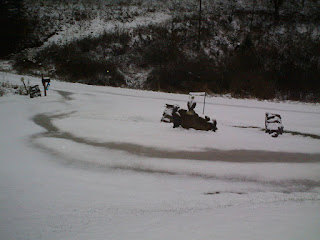 Well, seems like yesterday I started this blog and today on the end of the world I made the 500th post! To celebrate Mother Nature added a bit of white slushy stuff outside. We got about 2 inches of wet snow last night which has condensed into a less than fun mixture of water and snow, which will become frozen hard as the temperatures go down tonight. Then it will be only one step to the road from the house the rest will be a long slide.
The snow and wind last night knocked out the power around 9:30 pm, when we called they said we were the only ones to call so far. However, I am thinking they must have had more cause at 4 am they called us to let us know we had power. Gee thanks for that I am sure I wouldn't have been able to figure it out in the morning when I woke up. Guess we are in for more wind tomorrow and may get a white Christmas after all.
Lee is starting to feel a bit better, but I don't think she will be out splitting any wood soon. Hope you all have been enjoying the blog. I will try to go around on Christmas Day and get some good Leetonia pictures. Mountain girl, Paula, logging off.
Posted by eaglebear at Friday, December 21, 2012 1 comment: 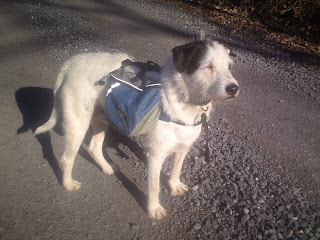 Well, this year is going out poorly for us. Last Tuesday Lee Anne complained of severe nausea  upper back pain and shortness of breath late night on the 11th of December. It is a long way to the hospital when you are in pain and on bumpy roads. We got there close to midnight, I feared she might be having a heart attack, since they tell you those are the symptoms for women. Turns out she had a badly infected gall bladder. They took it out on the next day, but could not do it laproscopically, since she had previous surgery adhesions. So she ended up with about a 7 inch long incision under her right rib. Recovery is more difficult when the surgery  is done this way and she was in a lot of pain.
Two days after the surgery I came home after visiting her during the day, I received a call she had gone into intensive care for A-fib(heart problems). I spent all night watching the monitor along side her bed and things even out enough she could come home on Sunday. Lee is very drug sensitive and we felt it had been a reaction to one of the drugs they gave her. However, to be on safe side we are going back today for echo-cardiogram.
You would think that would have been enough drama from the entire year, but the day after I brought her home Scooter and Leo got into a bad fight over a grouse on my woodpile left my some hunters for me. Try as I might I was helpless alone to get them apart in the wide open space. They fought until one of them didn't move (Leo). I put Scooter away and went back to retrieve Leo. I had fears he might be dead, but he was standing and limping toward me. I had to take him to the Vet to be fixed up, Scooter came out good enough he just needed some antibiotics.
So now I must find a new home for Scooter preferably without other dogs. I can't risk anymore fights it is dangerous for the dogs and anyone trying to separate them. Needless to say I have shed more than a few tears over this decision, but it is the right thing for both of them and us. Scooter has gone everywhere with me the last five years as many of you know from watching the blog. He will be 6 in May is neutered, has good basic obedience commands and loves to retrieve tennis balls. He weighs 95 lbs so he is not a little dog and he loves attention sometimes a little overbearing in that regard. If you know of someone who can give him a good home email me directly at campeaglebear@yahoo.com. Don't post a comment if you want me to contact you because I can't respond directly to you.
So along with a low amount of work and high expenses. I have decided to sell five acres of land I own on the other side of the road. It is all wooded on the North slope and has Buck Run Creek going through it. If you are interest see sidebar and contact me direct. It is also listed under Zillow.
2013 can only be up. Mountain girl, Paula, logging out.
Posted by eaglebear at Thursday, December 20, 2012 1 comment: