I came up from Cedar Run last night with my Toyota FJ Cruiser. On a scale of 1-10 for difficulty I am giving it an 8 and a 10 for fear factor. The snow although only 8 inches deep it did not pack down well. Usually after the snowmobiles have run on it for a while you can climb on top of it to drive. This was not the case Friday night. My vehicle sunk through and it seems to be pulled around a lot by the texture and ruts in the snow. It took me 45 minutes to make the 8 mile trip most of it at 5 mph in low 4 wheel drive. I didn't have chains on as the other person who used chains said they didn't help. It is sort of like driving in loose sand.
Of course it is perfect ski and snowmobile weather and the snowmobilers are out and making up for a dead season up to this point. We are expecting anywhere from 8 to 12 more inches Sunday-Monday so I will not be going down in the truck towards Cedar Run anytime soon. Lee said a car came down the road which is plowed to our house and made it only a few feet into the unplowed part and turned around....wise very wise. You do not want to get stuck on a State Forest Road in this weather wind chills are supposed to be dangerously low today and if you can get towed(and that is a big if) it will cost you $500 or more and many insurance companies don't cover tows in off road areas, which they consider roads without winter maintenance to be.  If you are snowmobiling be careful, let someone know where you are going or travel in a group, and please don't drive drunk unless you are planning on loosing your life in the middle of the woods. It looks like I will be doing a lot of snow removal over the weekend. I will update at end of the weather to let you know how much we got. Enjoy the snow and be safe. Mountain girl, Paula, logging out.
Posted by eaglebear at Saturday, January 31, 2015 No comments:

When it is warm inside your cabin and warm outside there is little thought as to what is inside your cabin when you decide to winterize it and let it return to the temperature of the winter cold for a while. Over the last 12 years of winterizing other's camps I have seen a few things and know what works and what does not.
Often times I get the call to go down to shut a camp down and there are things left behind other than water pipes that when frozen often make a mess at best and at worst may make you sick next year. First on the sick note. It is really best not to leave canned food behind to freeze. Although it will often survive and look alright if the seal breaks it may not be fit to eat. Any thing in a glass container should not be allowed to freeze. Also the other thing that happens is people often forget what they have at camp and take up more and use it first. Repeating this process over the years can leave you with food that is often as much as 5 years out of date(which I have found). Also  use caution when leaving meat in your freezer. It isn't uncommon during the summer for us to lose power, you won't be able to tell how many times your meat has melted and refrozen if it is frozen when you come to camp. Also meat needs to be used up or it becomes freezer burnt. The other thing people don't think about are drinks, soda cans, beer cans, and anything under 10% alcohol will not survive a freezing and explode where ever it is. Water in plastic containers may survive with some flexing available, but it is best to take it home as well.
On to the less pleasant task of keeping as much in rodent proof containers as possible, This of course includes any food items in boxes or cardboard containers. But less obvious are things like toilet paper, paper towels, and tissue. Anything a mouse can make nesting material with will get chewed up and stashed in any convenient hole. The other thing mice seem to love are sheets and blankets. It is a great thing to crawl under and leave droppings at best. My grandfather had a steel drum he closed all of his bedding up in including pillows when he closed down. If you do choose to leave everything on plan on washing it before the season. Next on the list is dealing with mice with poison or traps. Some people like the 5 gallon water bucket with a peanut covered roller on it. The  water bucket is filled with RV antifreeze mixed into water and there is a ramp for the mice to crawl over to top of bucket. It is an effective non-toxic way to deal with mice, but leaves a messy mouse stew to dispose of in the Spring. Next are spring traps, which are a one use thing, so once they are sprung they are of little value and the mouse decomposes wherever it is trapped. On that note never leave your coffee pot or any tall container open and where mice can crawl in. We found a decomposing mouse in one and could never eliminate the smell. It went to the garbage. As far as mouse poison goes. Don't get anything a mouse can carry off as they will store it everywhere. I prefer the blocks and when placed in a plastic dispenser are safe from small children and other domestic animals.
On to the water pipes. Turn pump off first. In order to drain them with gravity all pipes must have good slopes and no dead ends if not your only solution is to drain as much as you can and either run air pressure through each line systematically opening each water faucet one at a time starting with the closest, shutting it then on to next. If using a RV pump the process is reversed open farthest until pink water comes out and work your way back. USE ONLY RV ANTIFREEZE CAR ANTIFREEZE IS TOXIC AND SHOULD NEVER BE USED!! It only takes a couple tablespoons of car antifreeze to kill a dog and not much more to kill a human. When using this method you will need to have a by-pass on your water heater to keep from filling the entire tank. When it comes to water heaters make sure they are turned off before drained and that you open pressure relief valve as they drain to get all the water out. Never turn water heater back on until completely filled. When it comes to toilets you must use RV antifreeze. Drain as much water as you can and then use a shop vac to suck out the rest. Pour a small amount in tank and larger amount in stool. Plunge antifreeze through stool trap to get all the water out.
Next make sure every drain has RV antifreeze in it. If you turn off your refrigerator open doors to keep mold from forming. Make sure if you leave your refrigerator on it has the kind of refrigerant that can be run in freezing temperatures...many of the new ones do not. When the weather was still warm like late fall we would often do one last thing before we left. We set off bug bombs to kill any crawlers left behind. Every camp has it's own particular needs so this is not meant to be a complete list. If any of you have horror stories or have learned something by doing wrong I have not mentioned please feel free to comment. Mountain girl, Paula, closing the last camp of the season.
Posted by eaglebear at Sunday, January 18, 2015 No comments:

Strike up the band!

It is hard to believe Leetonia once had a band. But in the early 1900's they made music in  Leetonia. Now the only music that is heard is the sound of the stream bubbling downstream or roaring in a storm. This time of year a new sound is heard the sound of snowmobiles buzzing  through the woods. We have had barely enough snow to cover the ground but those who had a long weekend pushed their machines to the limit today just to get out and about. If you have a snow-cooled machine or don't like the sound of gravel, I would avoid riding until we get some more snow. The road is still passable coming up from Cedar Run, but it can change in an instant if we get the rain we are supposed to get tomorrow. I noticed some hardy folks from the Ruins camp were up and it was a below zero night last night so I am sure they kept the wood burner fed. Seems like on days when the nights are cold it takes most the day for the house to start feeling warm again then we go to bed. One good thing the days are now getting longer minute by minute each day there is a bit more sun and that always helps my attitude. I am not a fan of these short days no time to walk in the daylight.

Not much else new in the middle of the forest. Just be careful and make sure you have a set of chains and nerves of steel if you decide to wander away from the plowed roads. Mountain girl, Paula, logging out.

Posted by eaglebear at Saturday, January 17, 2015 No comments: 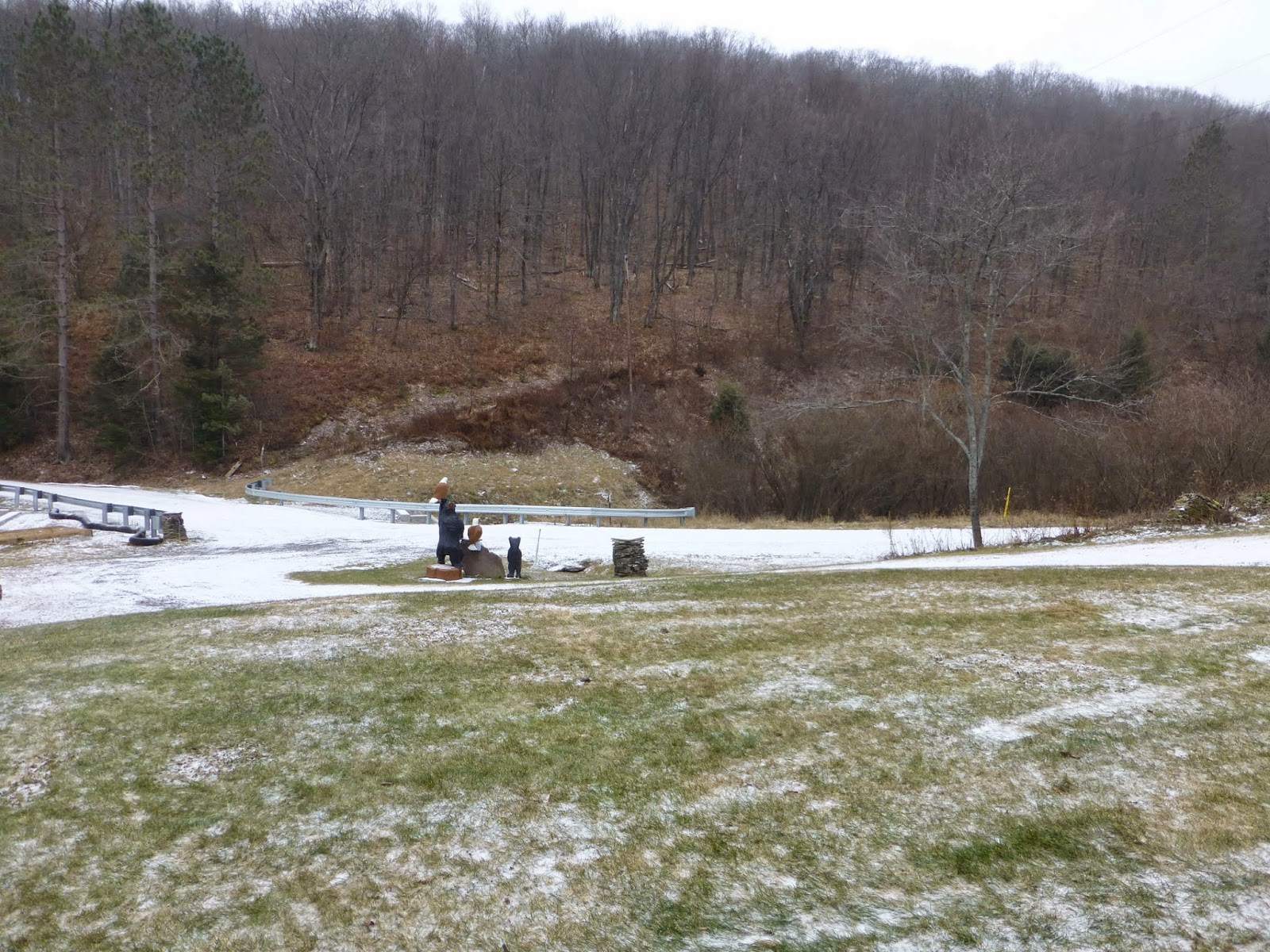 2015 begins with the weather still in flux. One day it is in the 40's and the next we are cold again. This has kept the road down to Cedar Run mostly open. There was a small land slide just after the Bobcat camp that made it a little tricky going through. A couple days ago I noticed the State put up cones, but has yet to remove the rubble. It is alright to go over with a regular sized vehicle, but if you have a large dually or trailer bigger than the wheel base of a car I would stay clear of it until they get a backhoe up to get the rock moved. The landslide happened a couple days before Christmas when we had above normal temperatures and rain. It makes you drive very close to a steep vertical drop down to the creek. From past experience going over the side in a vehicle, I would recommend it.
Today we are having wintery mix a word I have learned to hate. It means anything from freezing rain to snow. We have had a small covering of what I could best label as falling ice crystals as you see from picture above. They are calling for very warm weather tomorrow so it will probably melt. Next week is going to give us 3-5 inches of snow followed by a dip back into cold temperatures.
Many of you have been wandering why I haven't posted more. I have a job that takes me some distance away during the week and have been playing catch up over the weekend. I would much rather be hibernating in Leetonia through the winter. Lee and I are looking forward to a great new year in 2015 and hope you all will enjoy it as well. Mountain girl, Paula, logging out.


P.S. For those of you interested in some bare land in Leetonia, I am putting the acreage you see in this picture across the road back on market. It is about 5 acres. Click link under links on left to see listing.
Posted by eaglebear at Saturday, January 03, 2015 1 comment: