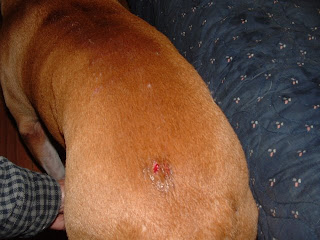 Leo, never chased a bear before Jack died last Fall, but decided this Spring it was his job now to take care of them. Jack bit and chased many a bear during his five years up here and the bears never laid a paw on him. Leo wasn't so lucky today.

I was walking toward Hooke's place up the road from mine about a quarter mile. Leo was slightly ahead of me as we approached the camp. I noticed he ran as he approached the pond and thought he was anxious to get a drink. 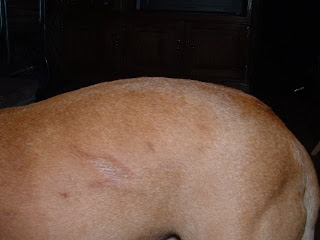 I came up by the propane tanks to be met by Leo, looking quite scared, hair up. He ran towards me and keep going. I looked where he came from and saw a 300 pound bear down by the feeder. Just then,Scooter, my young dog also saw it and started toward it. I yelled, "No!", and he stopped as the bear ran off. Then the heavens opened up with a downpour and I headed for cover under the porch with the dogs.

I decided to call Lee on the phone to come and get us when the rain turned to hail with lightening. Leo was acting jumpy and I thought it was because of the thunderstorm. The dogs and I jumped in the car, and Lee said, "What smells? Did one of those dogs roll in something?" I swore they didn't as we drove home, but I noticed the smell too.

Once we got inside the cabin with good lighting I noticed Leo's back and side had been clawed by the bear. This explained the smell and Leo's nervousness. I put him in the tub and cleaned everything off well, peroxided it, and put antibiotic ointment on the wounds. He had three puncture wounds on his back, one is quite deep and a claw scratch on the side. He faired very well for being tagged by a bear. It is yet to be seen if he will need to go to the vet and get some antibiotics as these kind of wounds can get infected fast. I am betting Leo will be much more careful around bears as he is not the bravest dog, but definitely the luckiest dog tonight. Mountain girl, Paula, logging out!
Posted by eaglebear at Monday, June 16, 2008 No comments: 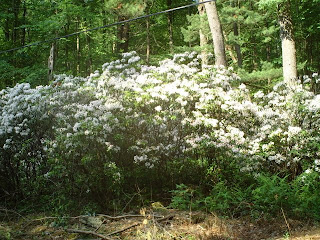 Looks like the Mountain Laurel will be great this year everywhere except where the Forest Fire burnt it, between Fahneystock, Mine Hole and West Rim. It seems like it has been a long time since I have seen this much color this soon on Cedar Mountain.

The Morris Rattlesnake Roundup is this weekend and they had quite a crowd today. I don't know whose child this is touching the rattlesnake, but I do know my daughter would have nightmares for weeks thinking about it.

This little girl had no fear petting the snake while 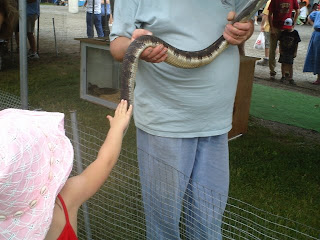 the bitting end was inside a plastic tube. They don't get the snakes out much, but when they do it is a treat for those who would never get such a chance to interact with these amazing reptiles. The snakes are injected with a microchip and their length, sex and other information is recorded. They are then released back where they were captured. Many times the same snake makes repeated trips to the festival in following years. 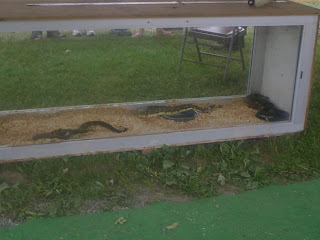 most part avoid confrontation. This does not mean that people aren't bitten. In fact, last year, a man in the Slate Run area was bitten when he moved a skid a rattlesnake was under. He walked a mile before being taken to the hospital and faired fine.

The last picture is the case they keep the snakes in for people to see as they visit the festival. Next weekend is the Mountain Laurel Festival for those who prefer a different kind of beauty. Mountain girl, Paula, logging out.
Posted by eaglebear at Saturday, June 14, 2008 No comments: 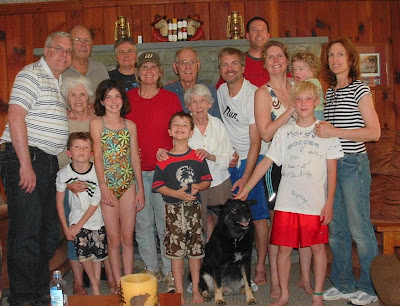 Sorry it has been so long since my last post. I had satellite internet problems that took a week to fix. Then a family reunion to prepare for. So this edition shows everyone who came for the reunion. Since people weren't in good lines for me to tell you who they are. I will just give you an overview. The youngest was my grandaughter, Ella 2 years old and the oldest my Great,great Aunt Pauline at 93, still sharp as a tack and full of great stories, some of which I will relay later.

The week before the reunion we had record cold, frost. The week of the reunion record hot in the upper 90's. 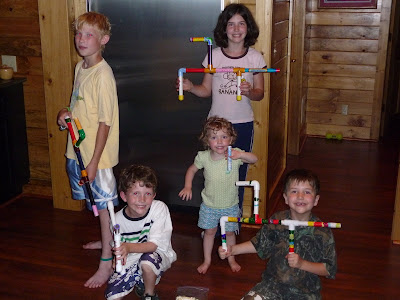 It is hard to know which would have been better. We spent most of the time in the creek cooling off.

The second picture shows the hit of the reunion, making and shooting marshmallow guns. The kids are displaying their guns. We had a kid versus adult war and I must say us Adults didn't fare too bad. 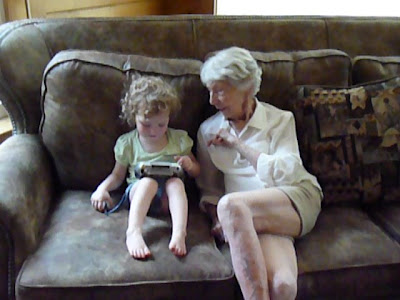 This is a great project and next blog I will give you the instructions to make your own. The last picture shows Aunt Pauline being shown how to use a leap frog pad by Ella the youngest. It is amazing the techno ability of the young.


I will cherish this picture as you never know if we will have the honor of Ella's great,great,great,great Aunt again. I promise to post more again, but I must head off to work.

Mountain girl, Paula, logging out.
Posted by eaglebear at Friday, June 13, 2008 No comments: