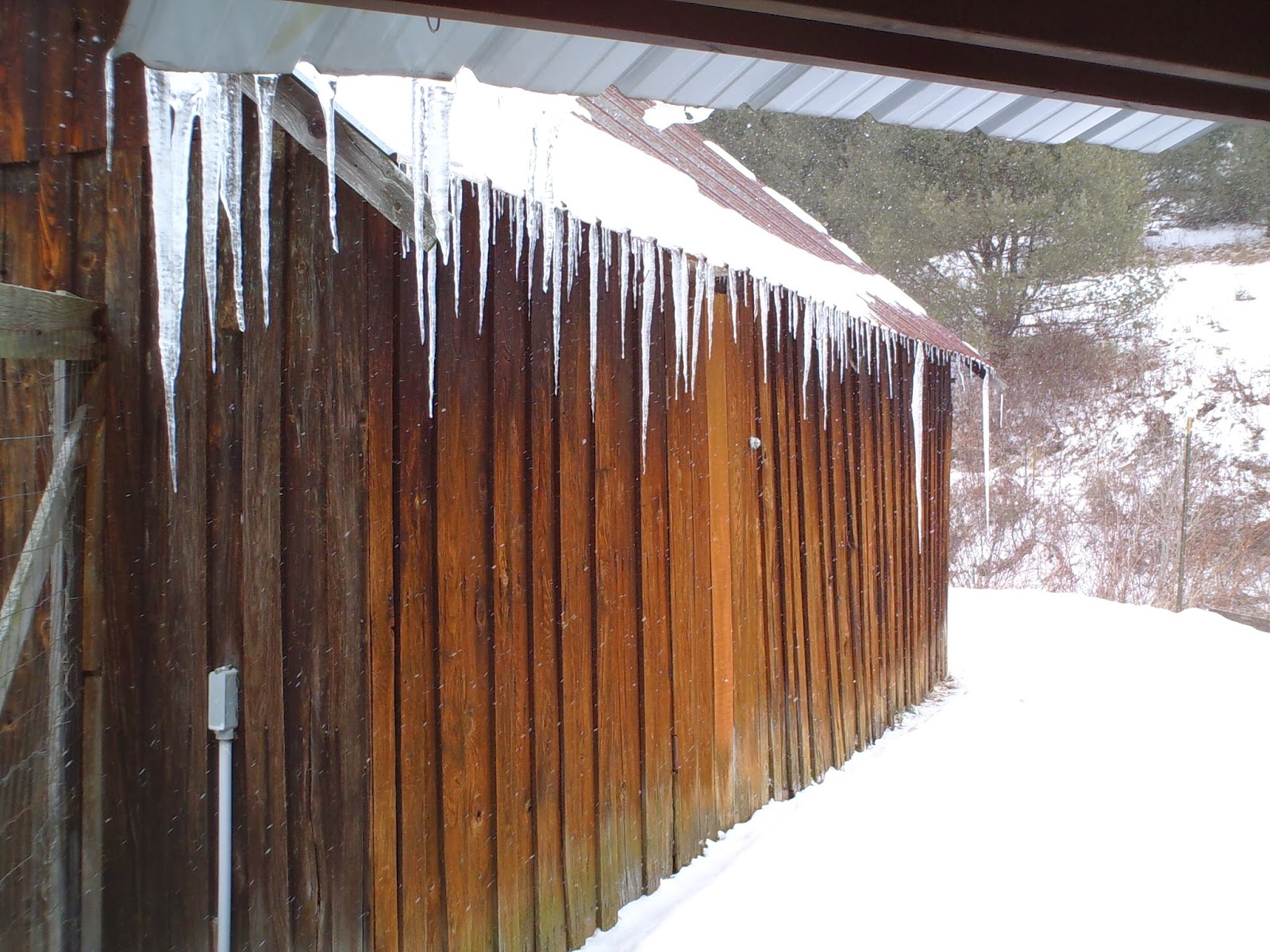 The return to the cold snap has sent everyone into the winter blues. Below zero temperatures have once again caused us to have to drip the faucet to keep pipes from freezing. The last couple feet down to the floor feels cold when the wind blows and the temperatures are this low. We are still holding fairly well on the firewood and it looks like we will make it through January with the wood stacked on the front porch. The next few months will be fueled by the back porch.

It is cold, snowing and the wind is blowing outside today. It isn't one of those days I feel like going out for much except getting more firewood. The dogs stay close to the fire. Speck practically sits on top the fire in this weather.
On a good note, I may have found a home for Felix, the cat. He has been staying at a man's house who has a female cat about his age since Friday. I am hoping things work out, since Lee's allergies to him were making it harder and harder for her to have him indoors. I have to admit it was very hard to haul him to a new place as he cried in his crate the whole way(1 hour). I felt extremely guilty. Then coming home to a house without him made me realize how much a part of the family he has become.
He would always come running down from upstairs to greet me as I came home and constantly purred and talking to me. He would go in and out the door when I let the dogs out. I think he thought he was a dog. He tried desperately to get them to play with him. They mostly ignored him or growled and snapped at him when he grabbed at their tails. Felix was quick to run if they made any move towards him. I think he thought it a fun game to tease them.I woke up in the middle of the night thinking I heard him meow and wondering when I would hear him jumping over the barrier gate or reaching his paws under the door when I closed it to keep him out. Although I would never have intentionally added a cat to our family, I have to admit he was very entertaining and loving. He was a tough cat to have survived as many months as he did outside with bobcats and foxes anxious to turn him into a snack. I  hope over time he will adjust to his new home and make friends with the other cat who can play cat games with him.
Looks like we will have light snow the next four days then we are in for a couple more days of below zero weather. Not much action up here as the snow isn't that good for snowmobiling on top of the icy layer underneath it. My car is struggling in the morning to warm up and sounds a little like squirrels screaming for about five minutes. Planning on kicking back and enjoying not going anywhere this weekend. Mountain girl, Paula, logging out.

Sorry not to get anything up before the weekend our internet went down last Monday and they just fixed it a couple hours ago. The roads are still quite icy underneath the 4 new inches of snow we got a couple days ago. A few snowmobilers have been out, but for the most part a very quiet weekend. Just the kind the mountain girls like. One group was up to Leetonia for the weekend and discovered it was even difficult to walk outside. They were given a primer on spikes for your shoes. See this old post for a picture of the ones I have.  I keep a pair in my car at all times just in case I need to get out. Nothing worse then stepping out of your car and finding yourself laying on the ground.
I will try to update you on the roads next weekend before the weekend with a few pictures. For now enjoy winter it will be around a few more months. Mountain girl, Paula, logging out.
Posted by eaglebear at Monday, January 20, 2014 No comments:

As I listened to the rain fall last evening, I knew we were in store for some bad roads. The ground is very frozen from our below zero weather last week and the rain didn't stay liquid long when it hit the earthen ice-cube. Our driveway is an ice-skating rink leading down to the road which isn't in much better condition. Just looking at it makes the muscles in my chest tighten in preparation for driving over the mountain.

My least favorite weather: chain and cleats for your shoes weather. Falling can result in a nasty bone break, muscle strain or worse a head injury. Driving on this is like floating on a boat in the wind without a rudder. I am hoping the township brings some more cinders down before I need to leave for work tomorrow morning. This is the kind of weather it is really better to stay home, wish I had that option.

Before we got the rain, Lee saw about six turkeys walking on the side of the mountain next to our house. They eat the seeds on the weeds stretching their necks high to reach any seed still left for the taking. They seem to like the Multifloria Rose berries as much as any thing they can find. You may have to look close to see them as their color blends into the patches of brown against the snow.

I wouldn't recommend anyone coming back here unless they have to. It is not going to be fun traveling until we either get some more snow on top this ice or it all melts in March or April. The temperatures are about ten degrees lower back here than what the forecast shows for the area because of the snow cover and the mass of very frozen ground keeping the air temperatures low. As always be prepared for any emergency if you do come back. Mountain girl, Paula, logging out.


I threw in a little video that you will have to view at the blog site to enjoy. We awoke to -8 this morning and the sun rising to warm it up to the low 20's today. When it gets below zero I have to let the faucet drip all night to keep the water lines from freezing. My grandfather buried the water line to the well a bit too shallow for full time living up here and dripping is the only way to keep it from freezing.

We got about 6-8 inches of new snow on Thursday and Friday bringing the snowmobilers back to the mountains. Although our road is plowed they didn't scrap it down to the grave so a few snowmobilers have been buzzing by the house this morning. Most of the snowmobiling is on the pipeline and other unplowed roads. You can hear them buzzing like bees in the trees as the sound bounces through the mountains.

The sun made the mountain like a postcard today with the blue sky above and the fresh white snow below. I put on my snow pants and just laid on the side of the mountain for a while looking up at the few white wisps of clouds passing over. The sun doesn't rise far over the mountain to the South of us during this time of year. In fact, it just comes up in the valley and follows the top of the mountain until it sets, casting a long shadow in front of the mountain. Fortunately, our house is high enough to get sun most of the day and that really helps warm it up and brighten things a bit during the short days of winter.

We did two puzzles over the holidays. The first was a 1000 piece one on Christmas and the second a 750 piece one on New Years Eve. I got down to the last piece to put in at 2 min before midnight and it was missing. My searching didn't find it before midnight and I had to settle with finding it under the recliner the next day. Thanks I believe to a mischievous cat pushing it there. There is a lesson about goals and how they don't always go on your time schedule.

I have never had a indoor cat before and I can tell you they are much more mischievous than the dogs. He is however catching the mice which has eliminated my need for poison or traps. Of course he likes to bat them around the house for a lot longer time than I will tolerate before I throw them outside. Speck investigated the one he had this morning and after sniffing it and seeing it wasn't moving didn't seem to understand why the cat was still interested in it at all.

Tomorrow it is supposed to get above freezing and possibly rain before again turning to snow Sunday through Monday morning. The possibility of rain in between the snow never thrills us. The ground is so cold it will instantly turn to ice and make driving very dangerous.Then it is supposed to go so cold the first few days of the week it will make last night seem like the Bahamas. Chains and four-wheel drive are still a must if you are to travel anywhere up here this time of year. Have a great 2014 from the Mountain girls and boys. Mountain girl, Paula, logging out.

Posted by eaglebear at Saturday, January 04, 2014 No comments: