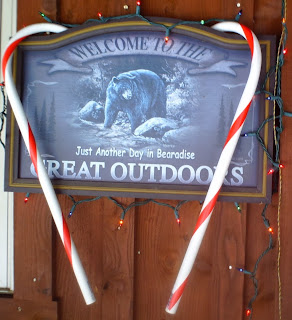 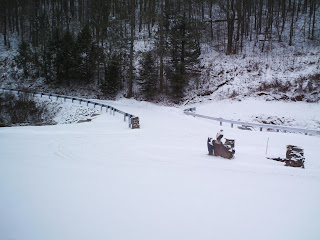 We got a white Christmas and a cold one. Temperatures last night made it down to 0 and didn't make it above the 20 degree mark today. A big change from the snow melting 55 degrees we had two days ago. We got about an inch of light fluffy snow yesterday and overnight. The snow had completely disappeared except in areas of complete shade or piles from plowing. It doesn't look like there will be much more snow during the next few days and temperatures should warm up ten or fifteen degrees. There isn't enough snow for snowmobiling and four-wheel drive vehicles should be fine on the roads. As usual use caution as there could be some ice hiding under the snow in spots.

It has been a quiet day in the mountains and Galeton was like a ghost town. I had to run in for some back up gasoline after Lee gave ours to some snowmobilers last week. We received a nice note from them thanking us for the map and gas and more than reimbursement for it. Be prepared if you go into the woods this time of year. Have a back up plan for your back up plan. We are the only ones living for at least 7 miles up here and that is a long way to walk if you need more gas or help.

Hope everyone had a great Christmas. Mountain girl, Paula, logging out.

Posted by eaglebear at Wednesday, December 25, 2013 No comments:

Have a Beary Merry Christmas! 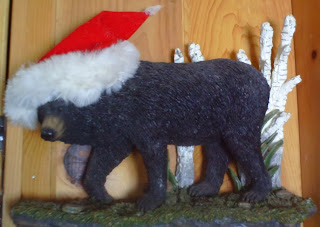 Even the bears are in the Christmas mood in Leetonia. The Christmas cards are done and Leo is once again disgusted with the whole process especially the part where Felix the cat tortures him during one of our shots. The dogs are always glad when the picture taking is over.


There was still snow on the ground this morning but it is melting fast in warm temperatures and rain. The quick melt sent Pine Creek up to 5.3 feet very quickly overnight. We awoke to the sound of our small creek ripping down the valley this morning. We are hoping the snow/ice melts off the road enough going South to Cedar Run so we can make it down to Cedar Run Inn for New Year's Eve, but that is still a week a way and much can happen to the weather in that amount of time.

Lee and I will be spending a quite and maybe not white Christmas alone at home this year. I don't see any snow in the forecast and the recent melt pretty much killed it for the snowmobilers. Hope you all have a great Christmas and a Happy New Year from the Mountain Girls of Leetonia.

The recent snow of eight inches plus has brought with it all the joys of winter sports. Along with those joys are the dangers. I received a message to pick a friends snowmobile up that would not start even though he had it recently tuned up.  After picking it up and heading home with my trailer, I was flagged down by a frantic woman and child on a snowmobile.

She had been lost since 10 am it was now 4 pm and the worst part was she had a four-year old riding with her.  I had a quick flashback to my first experience with a lost snowmobiler shortly after we moved here. He had left his wife and child in the middle of the forest, when her snowmobile wouldn't start. Then he drove completely around the forest without the knowledge of where he left them. Finding them involved getting the Fire Department and Forestry on sleds looking for them. They were found but not at all close to where he described and well after dark in the cold.

The lost woman of this recent event started to explain in lost person terms where she had been and where she needed to go.  "We started near a gas pipeline at the bottom of a steep hill." That narrowed it down to about six places I could think of off the top of my head.

"My husband and friends took off and I couldn't keep up. I lost them and couldn't figure out where I was." You could visibly see the frustration, exhaustion and fear in the woman's face as she wondered if she would ever find the rest of her family again. "Then my snowmobile stopped," she said. "My daughter and I walked for about four miles until we found someone who was able to start it for us. We have been driving around the mountain ever since." I couldn't imagine walking that far with a four year old in snowmobile clothes.

"Where is your camp?" I asked her.

"It is on the other side of highway 6," she replied.

"Well, you can't drive the snowmobile to it from here," I explained to her, "this is a plowed road from here to six. I can load you up and drive you there if you want."

She agreed and we loaded the snowmobile up and I turned around heading back towards Gaines on Elk Run Road.  Just as we got to Pine Creek Vista Campground she yelled, "That's my husband!" and reached over to my horn and pushed it. I slowed down and he stopped and backed up. She was practically crying and jumped out to greet him. He wasn't as happy and immediately yelled at her for getting lost. I just kept thinking everyone has there own way of dealing with fear and this person's way was obviously anger. Once they settled down he told me where they had started, which was up Elk Run just past the Lick Run intersection. So I turned around and drove the snowmobile to Lick Run where we unloaded it and they continued on their way. I am sure they spent most of the night exchanging blame for the event.

This whole thing reminded me how most people  who travel our forest are ill prepared. Remember if you are driving any vehicle it can stop working.  Cell phones don't work except on a few high ridges.  You can become separated from others in a group and there is a possibility you won't see anyone after that.  I really like my "Spot Messenger" for this reason. I can turn it on to live track and every 10 minutes it sends out a signal as to where I am. I can hit Check OK when I arrive and it sends a message either email or txt to a list of people I have as my safety net. And in extreme circumstances I can hit 911 and it will send my gps coordinates to the local 911 responders. I have found it works most places in the forest with the exception of a few bad valleys.

If you don't have this technology, you can still plan. Have a State Forest Map with you. Make a plan ahead of time for what you will do if separated. Keep track of where you are. Have warm clothes with you and even some water/food if you can. Make sure you have a full tank of gas.  Stay in one place if you want to be found. Let someone know where you are going and when you will be back. The best thing is to stay in a group, not everyone's machine will die at the same time and there is safety in numbers.

Not a winter goes by that someone isn't hurt or killed riding a snowmobile in the State Forest. It is a beautiful place, but it can become deadly with a few wrong decisions. Stay safe this winter. I have included a link to the left of the snowmobile trails in our forest and surrounding ones. Print it out and keep it in a plastic bag in your machine. Have a safe, happy and fun winter. Mountain girl, Paula, logging out.
Posted by eaglebear at Tuesday, December 17, 2013 No comments: 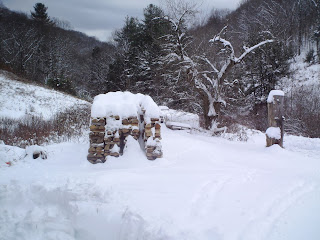 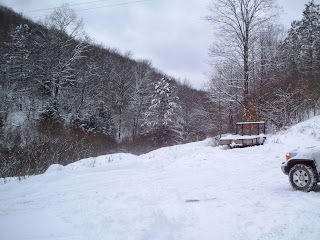 Sunday morning we awoke to eight inches of new snow on the ground. This is our first significant snowfall this year. I spent about two hours clearing two different driveways and sidewalks. My neighbor lets me use his four-wheeler plow combo in exchange for clearing his drive. It works pretty well in snow under six inches, but I had to take more than a few swipes to push the eight inch snow off and got stuck more than a few times. I guess that is what I pay for waiting until most the snow was over.

The township is plowing to the front of my house only so if you don't have four-wheel drive and chains don't go into the unplowed woods. If you get stuck you will be lucky to find anyone willing to come back and pull you out and if they do it will cost you a pretty penny.

It has been quiet without a sound today, not even a snowmobiler. Of course legally they aren't allowed on the State Forest Roads until after deer season this much snow does bring a few out. The dogs always think they want to come out with me until they realize it is cold and hard to walk then they are back at the door begging to go inside.  We are supposed to get some more flurries this afternoon. I am hoping not enough to plow again.

The snow always looks so pretty on the trees. Too bad it makes it so difficult to travel. The best part of winter is not having to go anywhere and staying inside next to a warm fire enjoying an occasional cup of hot chocolate. Of course some sledding or X-country skiing is good too. Have a great snow day. Mountain girl, Paula, logging out.
Posted by eaglebear at Sunday, December 15, 2013 No comments:

(Original News Story Link) Bear Attack story Although rare for black bears to attack a person it does happen and just happened to the south of us on Monday. 18 year-old, Camille Marie Bombay, was part of a large deer hunting party. They managed to scare up more than a deer when they ran into this mother bear and her three cubs. As Leo(our pit bull) can tell you chasing a mother bear never ends well. She had bites to her shoulders and arms and was treated at Lock Haven Hospital before being transfer to Geisinger.  A reminder to all of us using this beautiful area. We are walking into "their territory" and you don't always drive out the exact thing you are looking for. Camille is doing well and will have a heck of a story to tell for a long time.

On another note there isn't a lot of snow on the roads, but as always four-wheel drive is a prerequisite to winter driving in Tioga Forest unmaintained roads. I would also suggest taking chains with you and plenty of warm clothes and water should you have to walk a long distance for help. Cell phones only work in a very few high ridge areas and you can't count on them to save you. Plan ahead and stay safe. Mountain girl, Paula, logging out.


An 18-year-old teen named Camille Marie Bomboy was attacked by a black bear while out deer hunting with her step-father and a large hunting party late Monday afternoon. Bomboy and the party were driving deer through the woods when three black bear cubs ran by her, soon followed by the assumed mother bear who promptly attacked the young woman. Luckily Bomboy’s step-father was able to scare off the bear before the attack could turn fatal. - See more at: http://www.wideopenspaces.com/pennsylvania-teen-attacked-by-bear-deer-hunting/#sthash.vRXbTrnj.dpuf