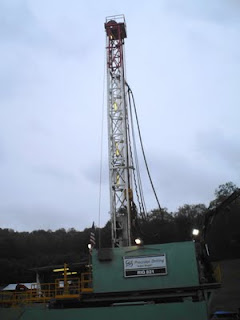 This is the drilling rig set up on Wetmore Run Road, which is just the other side of Cedar Mt. They are drilling at least eight different gas well sites on the other side of the mountain from Leetonia. All the sites are outside the State Forest Boundary.

The drilling rig which costs millions of dollars to move can drill 4-5000 ft straight down and the same amount in a horizontal direction. This enables them to reach gas pockets in the shale they could never reach drilling even five years ago. Needless to say this has brought Texas and Colorado gas companies to our area anxious to cash in on the Marcellus Shale gas boom, which extends from lower New York into Pennsylvania.
Leases of land to these companies can be quite lucrative for local land owners, especially if the companies find gas. The cost to the land is partially apparent when you see a couple acres of land cleared to drill. But there are other costs to the area: transport of water for drilling taxes roads that are in 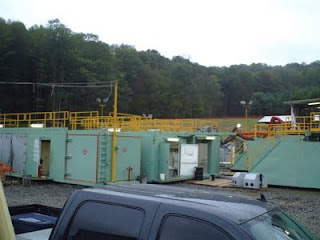 minimal condition to start with, water reclaimed from the drilling has to be disposed of somewhere and contains a low grade contaminates, neighbors whose houses are along these routes bear the burden of constant truck noise without the benefit of compensation, although there are no reports of local drinking water contamination this is not the case with all the wells being drilled in the State.
This area is poverty stricken and hungry for any source of income. Unfortunately only a few locals are making any money in either drilling or supplying for these operations. Seeing the eight wells on the other side of the mountain has soured me from the thought of turning my backyard into a gas well, although I admit the money is very tempting. When the drilling is done and the gas is gone, will everyone be happy with the outcome? Probably not. I just pray we all aren't regretting any damage done will not be easily repaired in our lifetime. Now that I have stood on the soap box... if someone comes to me tomorrow and offers me 100k to lease this property with the chance of making thousands a month in gas royalties more money than I could ever make doing carpentry, will I be strong enough to say no. I hope so. But I can't say I won't be as tempted as those who have done so and I certainly will not judge them. Let all hope this boom isn't the last thing we have. The Native Americans have a saying, "Do nothing that causes harm to the next seven generation." Mountain girl, Paula, climbing down from the soap box and logging out.
Posted by eaglebear at Friday, September 11, 2009