kayaking in the San Diego Bay

Had some fun kayaking in the San Diego bay with my son Hal today. We got to see a large group of Leopard Sharks, Garibaldi, Sea Lions and numerous small fish. We went on a guided tour of the bay which included going into a cave.
The tide was low and we were only allowed in one cave. The guide took one kayak in at a time. On the second group in a big wave side-swiped them and they took a pretty good beating, but fortunately, the guide controlled the kayak well enough no one got hurt. I went in with pretty much no problems. 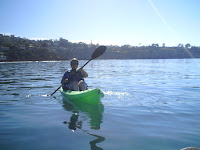 You can see the cave in the second picture. The salt water and animal life is a big change from Pennsylvania. It is nice to visit, but my heart is still in the mountains of Pa.
We kayaked about an hour and a half and just as we finished a fog rolled in. It was great planning to be out of the water, since you couldn't see much of anything at that point. Trying to soak up as much sun as possible to make it through a Leetonia winter.
Mountain girl, Paula logging out. 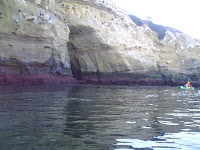 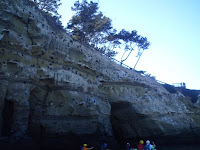