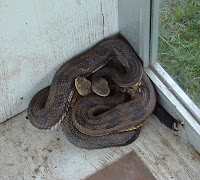 This weekend was the annual Morris Rattlesnake roundup. The rattlesnakes around here are Timber Rattlers which come in two colors yellow and black. During the contest they give out awards for the biggest yellow one and biggest black one. The snakes are micro-chiped and released back to where they were captured. 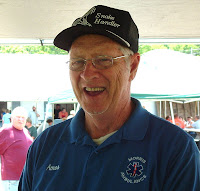 chip enables this tracking of the snakes for years.

The snakes are protected animals. The snake handlers are not as well protected. The man on the left is Amos Osborn, who is a long-time snake handler at the event. Last year a snake turned around and bit him. This is the second time he has been bitten and by far the worst. You can see from his hospital pictures it was quite a nasty bite.

Amos has decided not to handle the snakes anymore since another bite would not be in his best interest. Timber rattlers are generally not very aggressive. But placed in a stressful situation

they will retaliate. This should be a warning to all about attempting to handle these snakes.

All in all it is a fun time seeing the snakes at Morris every year. Mountain Girl, Paula, logging out!
Posted by eaglebear at Sunday, June 10, 2007