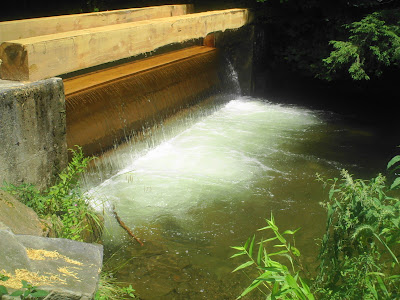 Well, I thought I would share one of my more interesting projects. This is the repair of a dam on Cedar Run. I had hemlock 12" x 12" x 21' beams cut to replace the old rotten ones. I would like to have you think I lifted them all by hand, but I don't have superpowers.
We hooked the old ones out with an excavator and trimmed the new ones to press fit into the existing space. The only problem we encountered was that the far pillar had been undermined by the last hurricane a few years back and the bottom of the creek scraped down to the bedrock as much as two feet below the original first beam. We were able to hang one beam from the bottom of three keyed in on both sides. The bottom one is keyed into the far end and timber screwed and plated on both sides with 1 x 12 hemlock. Then we ran vertical 2" thick hemlock on the up creek side of the dam down to the bedrock screwing it to the timbers. As we finished more and more boards the water got higher, but initially would not overflow dam. We back filled with as much gravel as possible still the water leaked enough to stop the overflow. Finally with a quick flash flood, mother nature fixed our problem bringing enough mud and gravel downstream quickly to plug the leaks. Now it is flowing very neatly over our top board. I am told the fish jump 3' during spawning season so the dam fall is limited to that height. It will be interesting to watch them jump.
The beams you see on top of the dam are to be removed as soon as it stops raining and dries up enough to get back on the grass. Mountain girl, Paula, logging off.
Posted by eaglebear at Thursday, July 30, 2009

Wow! What a beautiful and quality job you did on that damn. I recall you showing Carol and I the damn needing repair, during our visit last September. I hope things are going well for you and Lee.

I just read my comment this morning and realized I need to return to school and learn how to spell "dam", damn! Maybe you can correct my initial message?

Very nice job on that dam. I didn't even know there were any dams on Cedar Run. So I'm curious, where is the dam located? I'd like to look for it this fall when I flyfish on Cedar Run. Thank you!
Greg Amand amand806@yahoo.com