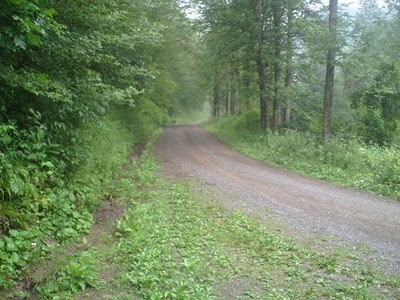 When the weather gets hot the rattlesnakes are on the move crossing the road to get to the cooler streams. Between Lee and I we have seen 5 snakes in the last two weeks. Two yellow rattlers and 3 black rattlers.
There is a mini cub explosion going on in Leetonia. We have a mother with three cubs and one with four cubs. It is unusual to see either but both is unheard of since we have lived here.
You are probably wondering what this picture has to do with bears or snakes. Nothing! As you are going toward Leetonia on Leetonia Road two bridges past the Whippoorwill camp you will come to a long winding hill. This hill is a bit hard to get up in the winter when there is snow and ice not so much because of the grade but the turns and length can wear out a good run at it. Well I guess this hill has another name according to Bravo Button, 80, and lifelong resident of the area. They used to call it "Balk Hill", because the horses would stop and rest or balk as they pulled wagons up the hill. No amount of pleading would make them move until they were rested. I can't say I blame them. We are finishing up the second round of Census this week and hope to get back to a more normal summer schedule. Got a visit from Mark Amand and his wife over the weekend, always nice to see a reader and lover of Leetonia stop in person. Mountain girl, Paula, logging out.
Posted by eaglebear at Monday, July 19, 2010