Day after Thanksgiving in Leetonia 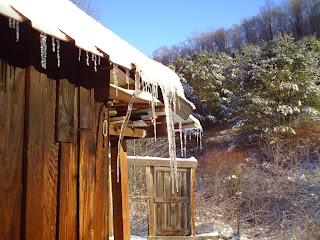 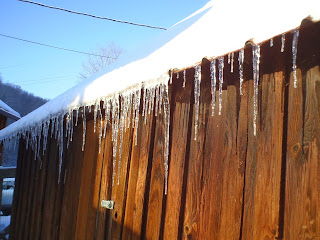 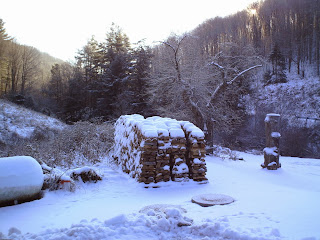 We missed the bigger part of the storm that came up the East Coast Tuesday.  We got a layer of rain and freezing rain in between a couple of small snows. There is about 3-4 inches on the ground, but the roads are tricky in places because of the ice underneath. It was enough snow that I put the snow blade on the neighbors four-wheeler and scraped off both of our driveways. My hopes is that some of the ice underneath will melt a bit easier without the snow on top.

The icycles are hanging like fine crystals on the side of the barn and sparkle in the sun when it peaks out from behind the clouds. You could also see the ice on the tree yesterday from the rain two days earlier. If all of that had been snow we would have been knee deep for sure.

The firewood for next year is covered with a blanket of snow. It always makes me feel a little rich to see a big stack of firewood all ready and waiting. Sort of like a Leetonia winter heating bank. Temperatures have been a bit below normal with a few lows in single digits already. Nothing like sitting close to a warm fire on those days.

There were a lot of bear hunters up before Thanksgiving but I haven't heard of any local results. The woods was fairly quiet over Thanksgiving day and we enjoyed a large meal that Lee fixed. I think it could have fed about ten people instead of two. We will probably be eating it much of the next week. It never seems right that you spend so many hours cooking such a feast and the eating of it takes so little time.

Our feral cat, Felix, has been totally spoiled for going outside. I have to push him out most the time and it isn't long before he is begging to get back in. He seems to think the dogs should be his best friends and he is constantly rubbing up against them and batting at Leo's wagging tail. That latter action gets a growl from Leo but he is too slow to show the cat he really means business and the cat just thinks it is a fun game. Still looking for a home for him if any of you want a nice cat. Mountain girl, Paula, logging out.