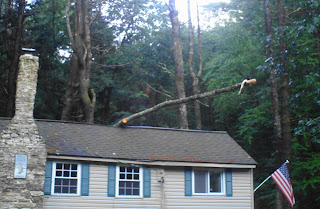 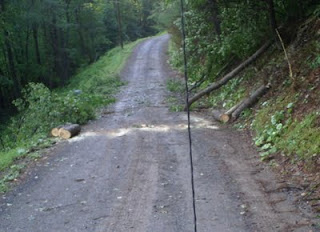 Sunday afternoon, I saw dark clouds in the sky off to the east as I power washed the mower. Then I heard a sound louder than the sound of the power washer moving towards me. There is nothing like a wind storm in the forest. I ran to get under cover just as the rain came pouring down and I watched the trees across from me being whipped like they were in a blender.
I could hear the sound a large trees breaking and falling to the ground as I watched from the porch. The storm door flew open hard, I grabbed it and tied it to the porch post for fear of needing to replace the hinges if it continued to be slammed open. I went inside to turn off electronics that could possibly be damaged by changing voltages. Just as I finished the lights flickered once, twice and three times to out. After the storm passed, I realized how much quieter it is without electricity. No refrigerator motors or sounds of monitors humming total silence.
Duane Cizek, a local plumber, had called me before the storm to meet me at a camp in Leetonia where I was to help him with some work. I called his house to let him know we would be powerless and his wife had said he had already left and should have been there. Listening to the sounds of trees cracking, I knew his trip would be slow. I decided to get the chain saw loaded in the truck and head towards him if he didn't show up soon. Just as I got the chain saw loaded I got a call. Yes, the phone was still working. The reason we have a corded phone is it often works when the power is out. Lee and Diane had been working at the Herre Camp and tried to come home after the power loss. Two trees blocked their way so I headed down to cut them off the road. Just as I got the chain saw ready. Duane pulled up behind me. He had cut 5 trees off the road to get to this point. I cut and he moved and we made quick work of the two blockages. Lee and Diane went home and we went to the site. On the way there I passed two people who had just finish cutting five trees from the Cedar Run direction up. It pays to have a chain saw with you up here in bad weather or you can easily get stuck on the road.
I remember one night a few years ago one of my helpers came to work in the morning a bit late after a storm. Of course he had a story to tell. He cleared several trees, but two of the trees had quite a story to tell. He noticed a car parked past one tree and a sleepy man appeared. He had been there all night. Here a tree had fallen in front of him(no chainsaw), he went to turn around and another fell behind him. He spent a long night waiting in the woods for someone to come with a saw.
Barry and Darla arrived at their camp "Bobcat Camp" to find a new decoration on the roof as you see in the first picture. It managed not to do much damage to the roof, but will be fun to cut off. Barry said they had come up after the storm and 44 had been closed due to so many downed trees.

I talked to Charlotte Dudkin at Cedar Run after the storm and she said her husband, Stanley was sitting in the dining room during the storm and saw a tent blowing down Pine Creek. Something was bobbing up and down in the tent. Could it be a person? He was taking no chances as he donned his superman cape and ran to the kayak. He caught the tent to find his person was an air mattress and he now was down stream a ways. As Stanley attempted to pull the tent out it filled with water he tipped his kayak over and was in the creek with bare feet against the sharp rocks. Now he had to rescue himself along with his pride. But all ended well at Cedar Run no one drowned, however the tent floated away somewhere down Pine Creek. Well you know what the mountain girls say after a storm? Free firewood! Have a great Leetonia day. Mountain girl, Paula, logging out.
Posted by eaglebear at Tuesday, August 11, 2009