Another way to get hurt! 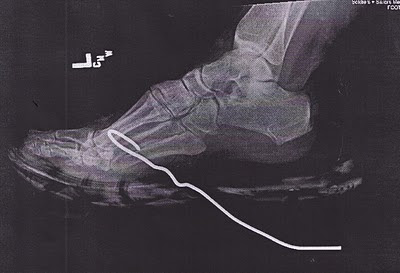 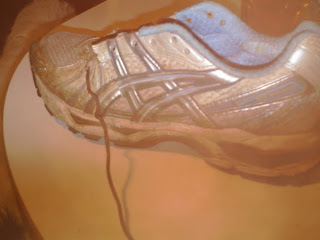 I don't know why I am able to come up with so many ways to get a few days off...but this is a douse.
I have a brush cutter that looks like a saw blade on the end of a weed whacker. The blade has a guard behind it and I thought that would keep things from flying back at me.
I will admit I should have been wearing steel toe shoes, but I am not sure that would have stopped this wire or maybe it would have deflected it into some other part of my body.
I was trimming Sumac on the side of a hill near the neighbor's camp. When I heard a snap and felt what I thought was a rock hitting my left foot hard. It was like someone had taken a sledge to my foot. I turned the trimmer off and got down on my knees banging the ground with my fist. I tried to put a little weight on my foot and thought for sure it was broken. I scooted down the hill through the cut brush and when I got to stand up, I was shocked to see about 10 inches of wire coming out of the side of my foot. Every time the wire moved it gave me a nice hint we were heading to the ER. I hopped to the truck and drove the 1/4 mile home, hopped in and informed Lee of the new afternoon plans. She got the dogs put up and helped me to the car, then said, "Are you sure we can't pull it out ourselves."
"I don't know?" I said, "Put a little pressure on it and I will tell you."
She came over and unlaced my shoe and pulled the tongue back. You could see the wire was definitely in my foot. Lee grabbed a hold of it and I almost immediately said, "STOP! That thing is in there. I don't know if it is buried in my bone. I think we should get an x-ray before anyone pulls on it.
So we went on the one hour trip to the ER in Wellsboro. Every time that wire moved a little a wave of pain would go through me. I tried to think of anything else, but it was difficult. Wellsboro Soldiers and Sailors hospital is small and the good thing about small is you don't have to wait long. It was less than a half hour from the time I hopped in until they had an x-ray. 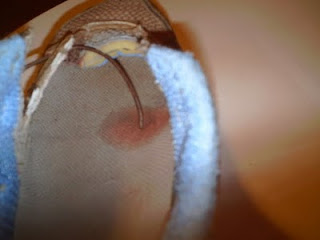 The nurse didn't say much except," Its in there pretty good. "
The last picture shows exactly the path through my foot the wire took. It came in on the top of my foot just below my little toe crossed the top, and I believe hit one of the long foot bones and went down between them an out the bottom.
Well, when the doctor came back, he didn't think it had gone all the way through. He told me he couldn't give me a local unless he got the shoe cut off and cutting the shoe off was going to hurt. I said, "Just pull it out."
As he started to pull one inch out, I was shocked to see more and more coming out. All together about two inches of wire was in my foot. He briefly looked at the bottom of my foot and proclaimed it hadn't gone through. But Lee said, "It had to go through there is blood on the bottom of the sock and the bottom of the shoe." Sure enough when he looked again there was a small hole that had stopped bleeding. "Well, I guess it did go through," he said in a tone that made us think he didn't like to be corrected.
He squeezed the wound and injected it with a local more that hurt worse than pulling it out. Of course I got the another tetanus shot, a antibiotic shot, some pain pills, and wrapped up. Lee said, I seemed a bit happier on the way home and talked a lot. We had to return a couple days later for another kind of antibiotic to stop the flaring up. However, today it is looking good and I think in a couple days, I will be able to get my shoe back on. I am sure the bruising I took will last a bit longer. Looking at that wire and how far it went into my foot, I am thankful it didn't hit some other part of my body. Mountain girl, Paula, logging, and limping off.
Posted by eaglebear at Monday, August 23, 2010

Unbelievable. I'm just glad it wasn't worse and you were able to get it taken care of in Wellsboro. Praying for a full recovery.....

Ouch, hard to read about. Can't imagine what this was like. Get well, and please take care.