Christmas in the Valley 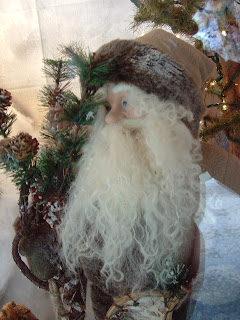 The SlateRun general store has a wonderful little Christmas Window I wish I could have taken a picture showing the whole thing but the glare on the window made it so I had to be close for a picture. The Santa looks like half the mountain men up here showing off their white beards. There is a cute cabin as well and many neat things in the store. Not many people were up yesterday and we had a nice chat with Tom and Deb Finkbinder the owners of the store. There is something special about the quiet slow nature of things this time of year that many of the locals look forward to. 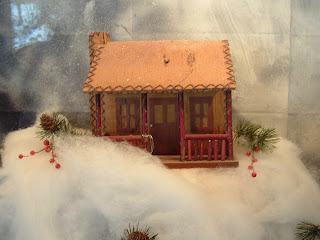 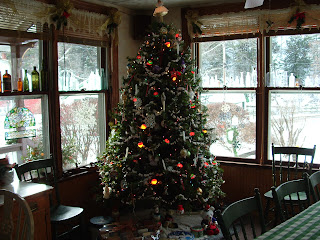 I also took a great picture of Charlotte Dudkins tree at Cedar Run Inn. She does most of her decorating on Thanksgiving weekend and warns visitors not to eat the candy canes on the tree. She says they are at least four years old and probably wouldn't taste too good. She strings popcorn and cranberries as well, but says the cranberries look more like raisins when they dry out. Stanley was out working on the plow, which he says always runs in July and decides to come to a halt at the first snowflake. We are getting snow today with a combination sleet snow as of 2:30pm we had about 4 inches not near the storm they predicted. Of course locally it is considered a no storm the more it is talked about. It is the ones you don't hear much about that catch you waist deep in the white stuff. Have a wonderful Leetonia day. Mountain girl, Paula, logging off.
Posted by eaglebear at Sunday, December 16, 2007