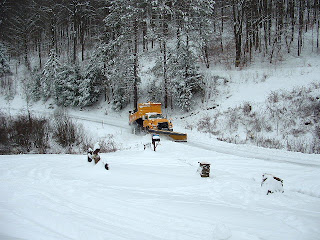 I don't know how many years it has been since the roads to Leetonia have been plowed. I know they were plowed in the 60's but I don't have the last date. Regardless, this is the first year they have plowed us out. They are plowing Leetonia road only from the Galeton side to downtown Leetonia and back no other side roads are being plowed so if you have a camp up here and want to use the plowed road to get to it you will have to come in from that side.
There are pros and cons to having a plowed road. The pro is we don't have to plan how to get a car out to where they do plow to snowmobile to to get out. The cons are that you can't snowmobile o 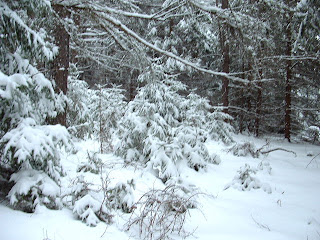 the plowed road and it disrupts the snowmobile traffic.
After 5 winters of snowmobling out and having limited ability to work. I decided to request the plowing. For those of you this inconveniences I am sorry, but I could no longer afford the luxury of not working in the winter months. If anyone would like the roads not to be plowed and would like to pay me a salary for not working. I would be more than happy to return them to their natural state. 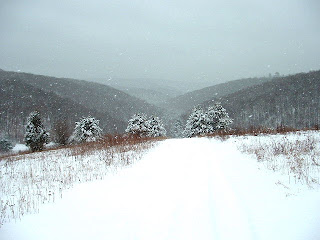 flakes you can actually see them in the last picture taken from the top of the hill. The mountains are dressed up in formal white today and it is great to be living in Leetonia.

By the way this is my 100th POST! of Lost in Leetonia. I love doing it and can't believe I have posted that many times since March. Hope you all enjoy it as well.