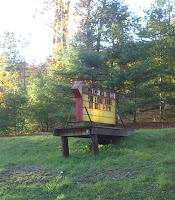 Tonight was the last Brown Township Dinner of the season. The Township has several dinners throughout the summer to raise money for the firehouse. The dinner tonight was pork and sauerkraut along with mashed potatoes, hot dogs, applesauce and an assortment of desserts.

There are a lot of people up for the weekend with the weather being nice and the leaves giving an enjoyable blast of color. You can see there was a full house inside the fire station as well as a constant exit of to go dinners. It is always a good time to catch up with friends as well as to meet people new to the area. You are probably wondering why the last picture is of a deer mount. Well, there are actually two deers inside the station and any other fire station that might seem strange. So I asked around because where there is a deer there is a story. Bob Drexel informed me that the two deer were actually part of a trio of deer mounts brought to the fire house annual flea market. One of the trio sold and the other two landed a permanent position on the wall inside the fire station. I had hoped for some elaborate story about the fire trucks hitting the deer or fireman hunting them atop of fire engines, but alas I had to settle with the true story. Brown Twp. Fire company has two deer mounts because no one else would take them.

I apologize to anyone who had a funny look when I took this picture. Guess I should have said cheese. Have a great Leetonia day from the Valley of the Pennsylvania Grand Canyon, Mountain girl, Paula logging out.