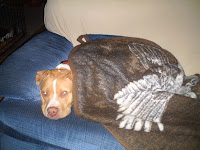 Well its official Leo isn't smart. He decided to take another try at a porcupine and yes we got to pull quills out of the inside of his mouth again. Two quills broke off on either side of his nose. We are watching to see if we can get them out later or it will require a trip to the vet. He hid in the bathroom and even jumped into the tub to try to escape the dreaded pliers.

Today he is not happy, not just because of the quills, but the weather went cooler. It is in the 40's and raining. Leo has retreated under the blanket until Lee Anne decides its cold enough to start a fire. It was 62 degrees inside the house this morning and according to Lee that just means you add a jacket. Some of Lee's friends are coming in today and I predict they will be able to convince her to start a fire while they are here. This is my least favorite weather because it chills you to the bone. Colder and it snows and you don't get wet so it doesn't feel as cold.

The leaves have made it to around 50% color so this next week should be good for viewing. On a sunny day I will get a picture for you. The hummingbird feeders have been cleaned and put away for another season. The hummingbirds officially left on September 23rd. So it is officially Hummingbird Fall.

We have had just enough rain to turn the new gravel in front of the house into a muddy mess. I don't expect much change in that until it freezes. I am seeing a couple of sun moments peaking through the clouds, but I think today is a good day to rest indoors and enjoy living in Leetonia. Mountain girl, Paula, logging off.
Posted by eaglebear at Friday, October 03, 2008