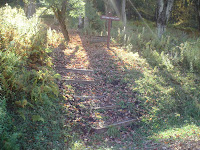 The first picture shows a big improvement done to the Leetonia Cemetery last year. Its own sign and a few steps going up to the graves.
All of the graves are on the side of a very steep hill just up Francias Leetonia Rd about 150 yds from its intersection with Leetonia Rd. At one time there was a school house on the property and you can still see the foundation for it. I believe they held church services in the building as well. Later on the school was moved to the site were the Bonitz camp now sits. 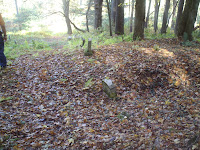 There is a very surprising thing in this graveyard. A large part of it is filled with young children and babies under the age of two. Many of the stones record to the day the amount of time the children lived. Most of the deaths occured near the year 1878. I often wondered what killed them and by chance was reading an old Morris Newspaper account during the same period. It had said there was a large Whooping Cough Epidemic that had killed many children in the town of Leetonia. 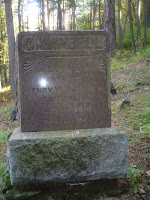 The second picture shows part of the row of tiny head and footstones. It seems they keep most of the youngsters in this row heading up the mountain. It makes you realize how lucky we are today to live in a society were infant deaths are much rarer.

The last headstone is a Campbell, a World War I veteran, and from what I could tell one of the last people to be buried in the Cemetery in 1919. The Campbell family surrounds this headstone and there are quite of few of them that lived and died in Leetonia. I know one of the young Campbell boys was killed by the train in town, but I have yet to find his headstone. I believe he was about 10 when it happened.

There is something about the Cemetery that gives you a feel for how hard people who lived here had things and what a hardy group they had to have been to survive here. Mountain girl, Paula, Logging out.
Posted by eaglebear at Monday, October 13, 2008

Paula, I enjoyed reading your post about the Leetonia cemetary. I discovered it by chance about 20 years ago when I was going for a drive and notice a small American flag up in the woods. I pulled over and hiked up to investigate. I, too, have wondered why so many small babies had died. Thanks for answering that question for me.