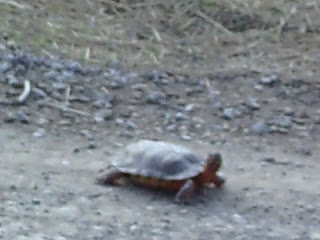 Lee Anne caught a Wood Turtle walking down the road and the moon rising over the mountain. It almost looks like the turtle is saying, "What are you looking at?"
It was a hot hot day in the upper 80's and about the same amount of humidity. Maybe that turtle was looking for a cool spring to beat the heat. The moon coming up gives hope of a cooler night. It is rare we to need air conditioning here because the cabin stays cool enough during the day if you keep the windows shut.
Then as the outside air cools down, I open the windows and run a large exhaust fan upstairs to pull the hot air out an bring the cooler air inside. 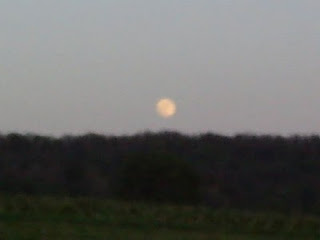 Now a quick change of subject. Snaggle nose the injured bear from last year made it through bear season and the winter. He don't look pretty but he is big. We were surprised he didn't get shot during bear season as he doesn't have the ability to smell much with a tore off nose.
Also word in Slate Run is the DNR is catching bad bears. Thanks to the feeding of the bears some of them have become a bit too brave and are being trapped and relocated. Which usually means we will see a tagged bear up here soon. They like to give us their problem bears.
As much as we all like to see the bears feeding them usually causes problems in the long run. They become brave and destructive and at the worst end are shot. So just be aware feeding that bear might be a death warrant for it. Well, its late and the mountain girl needs to get some shut eye before another day of work. Mountain girl, Paula, logging off.
Posted by eaglebear at Wednesday, May 26, 2010