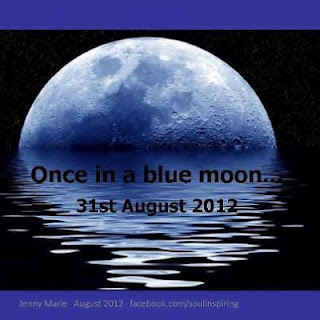 What ever you want to do once in a blue moon you better do it on the 31st. There won't be another one until August 21, 2013 and then again on May 21, 2016. According to the Farmers almanac a blue moon happens when there are more than 3 moons during a season, the 4th moon is a blue moon. On average, there will be 41 months that have two Full Moons in every century, so you could say that once in a Blue Moon actually means once every two-and-a-half years. The rare phenomenon of two blue moons (using the more recent definition) occurring in the same year happens approximately once every 19 years. 1999 was the last time a blue moon appeared twice, in January and March.


Of course the moon won't be actually blue this only occurs during times of atmospheric polution such after forest fires in Sweden and Canada in 1950 and 1951 and after the eruption of Krakatoa in 1883, which caused the moon to appear blue for nearly two years. Other less potent volcanos have also turned the moon blue. People saw blue moons in 1983 after the eruption of the El Chichon volcano in Mexico, and there are reports of blue moons caused by Mount St. Helens in 1980 and Mount Pinatubo in 1991.
On September 23, 1950, several muskeg fires that had been smoldering for several years in Alberta, Canada suddenly blew up into major — and very smoky — fires. Winds carried the smoke eastward and southward with unusual speed, and the conditions of the fire produced large quantities of oily droplets of just the right size (about 1 micrometre in diameter) to scatter red and yellow light. Wherever the smoke cleared enough so that the sun was visible, it was lavender or blue. Ontario, Canada and much of the east coast of the United States were affected by the following day, and two days later, observers in Britain reported an indigo sun in smoke-dimmed skies, followed by an equally blue moon that evening.
The key to a blue moon is having lots of particles slightly wider than the wavelength of red light (0.7 micrometre) — and no other sizes present. This is rare, but volcanoes sometimes produce such clouds, as do forest fires. Ash and dust clouds thrown into the atmosphere by fires and storms usually contain a mixture of particles with a wide range of sizes, with most smaller than 1 micrometre, and they tend to scatter blue light. This kind of cloud makes the moon turn red; thus red moons are far more common than blue moons.(Information from Wiki).

Some people believe full moons are the time to make wishes and what a better time than under a blue moon and it looks like Leetonians will be able to see the blue moon since there are no clouds forecast for that night. There isn't a better place than Leetonia to see the night sky. Without any ambient light you can see forever. I often see falling stars and think about how lucky we all are to have beauty overhead and under our feet. Mountain girl, Paula, logging out and wishing on a "Blue Moon".