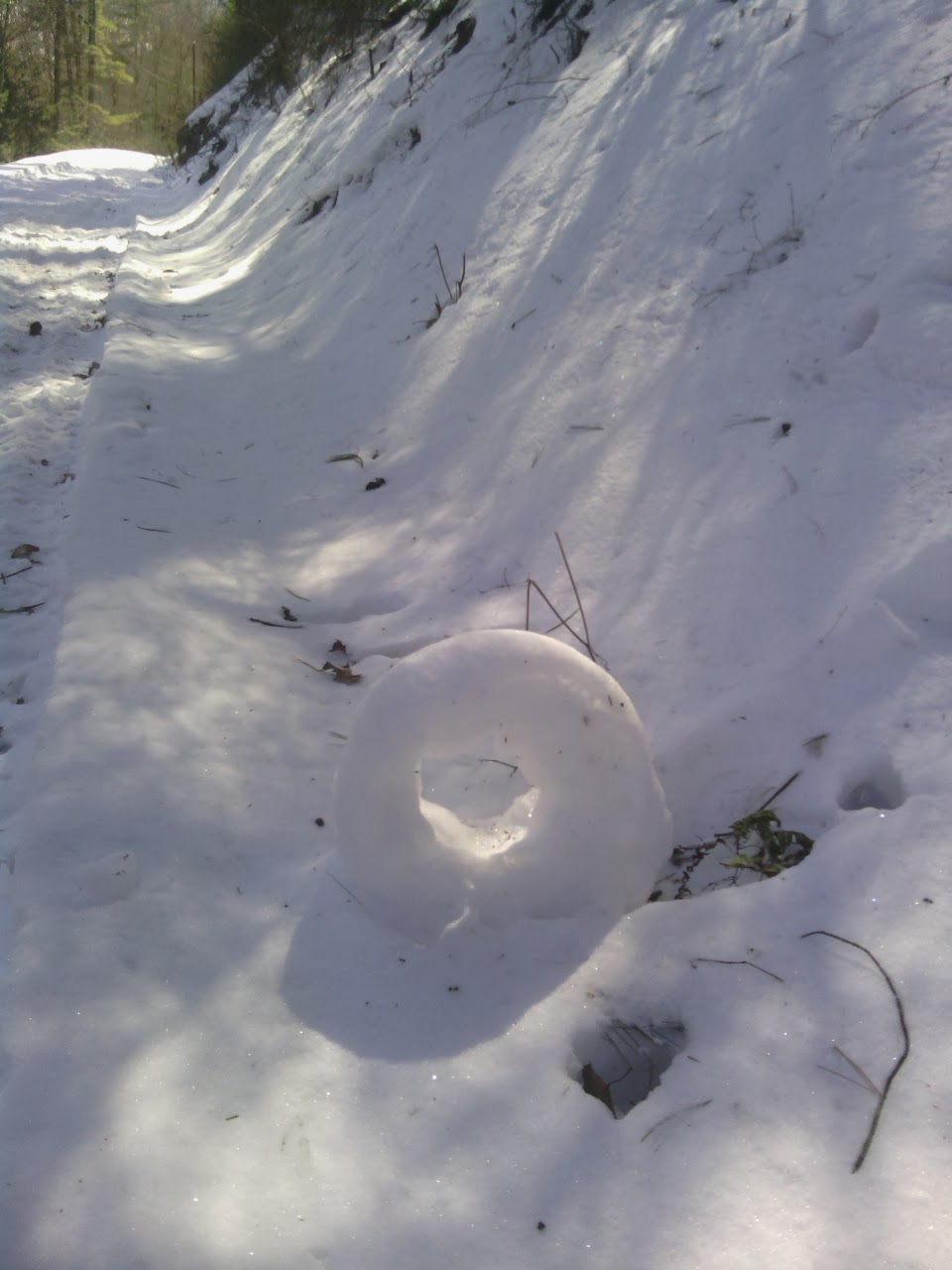 
Yesterday, we made a trip down Leetonia Road to Cedar Run our first in a long time. The warm weather last weekend combined with the -14 yesterday turned the road into a hard pack of ice and snow we could navigate with the Subaru. It was pretty easy going as long as we went slow and stayed in the center until the last 2 miles down from Mine Hole to 414. This part of the road is not groomed by the snowmobile groomer and there were some deep tire marks that froze into pretty tough ruts. Still all in all it was far from the worst time we have driven on the road. Fortunately, we met no one as passing would be extremely hard without someone getting stuck. Until the weather changes the road is passable by four-wheel drivers using extreme caution.

I took a few pictures along the way and was excited to find a snow phenomenon that rarely occurs. It is called a snow roller or donut. Here is the definition:
A snow roller is a rare meteorological phenomenon in which large snowballs are formed naturally as chunks of snow are blown along the ground by wind, picking up material along the way, in much the same way that the large snowballs used in snowmen are made.
Unlike snowballs made by people, snow rollers are typically cylindrical in shape, and are often hollow since the inner layers, which are the first layers to form, are weak and thin compared to the outer layers and can easily be blown away, leaving what looks like a doughnut or Swiss roll. Snow rollers have been seen to grow as large as two feet in diameter.
The following conditions are needed for snow rollers to form:
Because of this last condition, snow rollers are more common in hilly areas. However, the precise nature of the conditions required makes them a very rare phenomenon.

The ones I took a picture of where probably made some time ago, but were still holding their shape. I noticed several along the road going to Cedar Run. It almost looks like some little elves were busy in the forest making sculptures.

Along with the snow donuts the ice falls were as beautiful as ever. The extreme cold we have experienced has made them very thick and colorful. Some blues and browns are seen by the human eye and a better camera than I had to take the above pictures.

Today there were a lot of turkeys and deer out in the sunny day looking for some acorns and other things to eat before we get more snow. Possible 1-3 tomorrow predicted and it looks like March isn't giving up the negative temperatures quit yet with a negative ten predicted Monday night. I don't know about anyone else but I am ready for a March meltdown. It has been a long, cold winter in Leetonia this year and it is far from over. Mountain girl, Paula, logging out.

Thanks for the GREAT posting and glad you guys got out for a trip to town and civilization......always enjoy seeing something new!