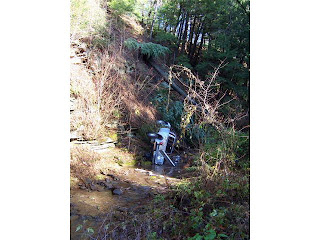 Whoops forgot to make the turn. After a night of drinking and plently of fog this truck didn't make the turn on Beaulahland Road just up from Cedar Run. Thanks to Fred and Clare Gost who live close to this site for getting the pictures.

Second hand information claims the truck contained four people. They went over about 4am and walked out to get help around 7am when they could see where they were. Lucky for them it was a warm in the 40's night not like last night when we went to 10 degrees.

According to a witness when the tow truck tried 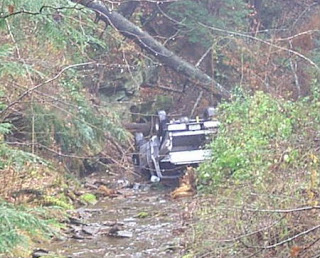 to pull the vehicle up the hill it got almost to the top and the cable broke dropping the truck back down and adding more damage. They then decided to go down the bike trail to reach the vehicle and had to roll the vehicle end over end to get it out. Guess it didn't look too good after they got it out.

I heard the victims had at least one broken arm and some cuts and bruises no word as to anything more serious. I guess they had a alcohol angel watching over them keeping them from being killed.

Welcome to the woods boys next time think before you drink! Mountain girl, Paula, logging out.
Posted by eaglebear at Saturday, November 24, 2007