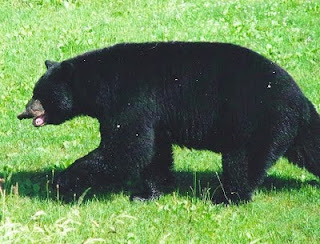 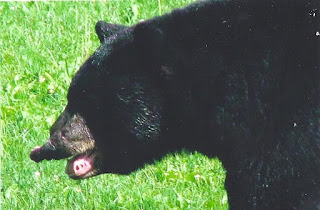 Snaggle Nose was first injured in June of 2009. None of us thought he would make it past the first hunting season and yet here he is over two years later. Dutch one of the township road workers took this picture during this summer of the bear right in our front yard. Snaggle Nose was in pursuit of a female bear at the time and didn't seem to care that the men watched him. Somehow he must be able to smell in order to track a female and keep from being shot. Unlike humans who might feel a bit intimidated if half their face was torn off old Snaggle Nose still makes other smaller bears flee in fright at the sight of him. And appears to be quite the lady's man.
I often wondered what the other bear looked like that Snaggle Nose tangled with. He is truly one amazing animal to have not only survived but prospered after an incredibly hard fight. Mountain girl, Paula, logging out.
Posted by eaglebear at Tuesday, October 25, 2011

We saw him this summer too at Steitztown and wondered what the heck happened to him. The injury looked so fresh. It's hard to believe it happened in 2009.

Is something hanging out of the bears mouth ?

Nothing hanging from mouth. What is in front is lower part of nose. To side you see his teeth all his lip is gone.

Merry Christmas and Happy New Year! From your friends at Fox Chase Hunting Camp ( the trailer)