Scooter is the only one that seems thrilled with the snow. No matter how cold it is he runs his head through the deep snow like a bulldozer until he looks like a frosted dog.
The extreme cold has caused considerable ice build up on the front of our roof something that rarely happens since it is facing the sun. The ice does a lot of damage to roofs this time of year and I am glad I do not have gutters on the edge that is icing. Gutters just help push the ice under the shingles. 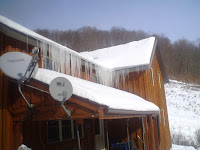 It warmed up into the twenties and feels like a heat wave. We are still getting some below zero temperatures at night. The cold has taken a toll on my firewood supply. I have been hunting for a source of seasoned firewood as it looks like we will be about a cord short. We always have the option of burning our green wood but that will not make much heat.
The last picture I took going over the top of Cedar Mountain after a fresh snow. The trees always look so pretty. When the sun comes out the trees will hurl balls of snow down quickly and you almost feel like you are in a snowball fight with them. 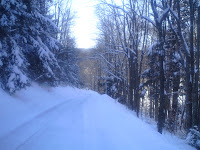 The sudden snowballs even startle the dogs, they think something is in those trees. Sometimes they would be right as a squirrel would dart across dropping even more snow from the branches. Only in a quiet place like Leetonia can the trees be heard throwing snowballs.
For anyone coming up the roads are tricky anywhere it isn't plowed with about a foot of packed and loose snow on them. Don't try it without four-wheel drive. Better yet stay on the plowed roads and snowmobile back. Mountain girl, Paula, logging out.
Posted by eaglebear at Wednesday, January 21, 2009