Visit from Sister and Kids 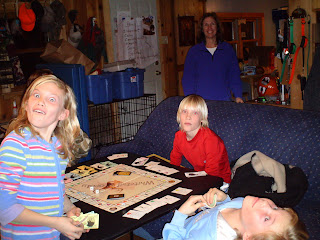 I got a call from my sister, Ruth, Saturday announcing that Hunter my nephew wanted to come up for Christmas and they were coming the next day. It is about a 9 hour drive from Indiana so I was very surprised they wanted to make the trip in Winter. So on Sunday the invasion started.

She brought the twin girls, Haley and Abbey and their older brother Hunter leaving the youngest and poorest traveler behind with his dad. As you can tell the twins at age 10 are a handful. Hunter almost 12 is a bit more settled. They all love the outdoors and animals so being up here came pretty natural for them.
This was the girls first trip up since they were little so they didn't have much memory of the place. It was Hunter's first trip up during winter. We played Whitetailopoly and I believe there wasn't much attention to the rules. The game is a bit too long for ten-year olds with lots of energy.

The snow was just good enough for sledding. 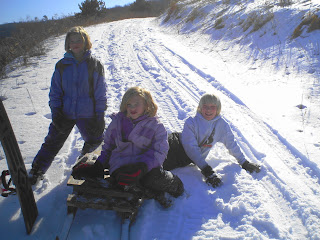 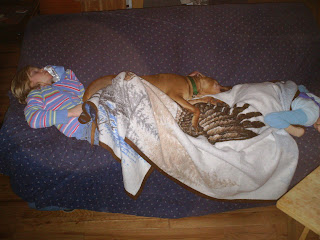 I pulled them behind the snowmobile on a truck tire tube for what seemed like a hundred trips back and forth to the pond up about a quarter mile on our back road. They walked, dragged, and were pulled by the dogs all over and by the end of the day the result is shown best by the picture of the twins passed out on couch with Thor passed out on top of them. I guess they make nice human pillows. 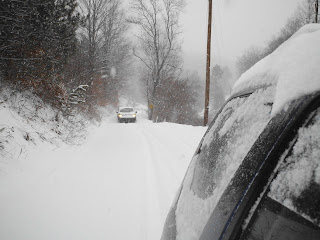 On Wednesday morning when they were to leave, a sudden quick snowstorm left 3 inches of snow in the amount of time it took us to pack my sister's van. Lee and I had doubts of getting the van out the now snow-covered and icy road, since a plow or cinders had not been seen for 4 or 5 days. Lee and my sister had picked up cable chains for the van, but when we tried to put them on they were too short. So we were off with a hope and a prayer up Cedar Mountain towards the Galeton side.
I watched my sister's van make it about a mile up the mountain and as the mountain got steeper the van got slower and slower and then just spun to a stop in one place. We had only made it half way up and the steepest part was yet to come.

My sister's Dodge van has no low gears just Drive, Neutral and Reverse. This is not a good thing for up here. Fill it with noisy impatient kids and you have a recipe for stress with a capital "S". I got out of the Subaru and plucked some pine branches to put under the tires which got us another hundred feet into steeper territory. About this time a truck came up behind the whole mess. If her van had not been plastic everywhere the problem would have been solved by pulling her up the mountain. But there was no where to put a chain on that wouldn't rub on the plastic bumpers and break them. Since this was an 2008 van that was not an option.

We decided to send Lee back for some old tire chains even though they didn't fit the van. I have used them to lay flat in front of vehicles to get them unstuck successfully in the past. As we waited my sister gathered loose bark off of the trees and we tried that under the tires unsuccessfully. By this time the kids needed drugs and the only advantage of these new vans is video playing. My sister inserted a movie and started it to keep them quiet and occupied. Lee arrived shortly with the chains and our hope revived.

I got the most pleasant position of driver as my back is still healing. Lee and Ruth put the chains under the front tires and they and the two men pushed. We started moving a whole 3 FEET! As soon as the chains ran through the forward movement stopped. Lee and Ruth retrieved the chains and we repeated the process another THREE FEET. I estimated we had about another 2000 feet to go so this was going to take a while. This process was repeated so many times I lost track. We I got to a flatter area and I went a good 500 feet before it stopped again.

The wind was wicked with this storm and the temperatures were in the teens so I am sure the windchill was negative. The chain movers and pushers were starting to get tired and in my family when you get tired you either get mad or joke about it. I will have to say a little of each occurred although it was mostly joking as my sister slipped on the ice putting the chains under the front tires, sliding under the van getting up quickly announcing, "Just checking under the hood, everything looks good!" and laughed. I'm sure she was wondering if she would be spending another night or two with the kids while we waited for the plow and cinders.

After another twenty or thirty times of moving the chains, sliding this way and that inching our way up the hill I caught another burst of forward movement. The men helping us had moved their truck up far ahead of us thinking I wouldn't get that far, but now as I moved forward without the chain leap frogging, I faced a decision to stop and not make it up to the top of the hill or squeeze past the truck and maybe hit it. I sucked in a breath to make myself smaller(not sure that works) and squeezed past him. Turned out to be the best decisions because the forward movement was just enough to make it to the top of Cedar mountain. I waited for the chain gang to drive up and we slowly went down the mountain at less then 5 mph and got her to our mail boxes a mere 7 miles from the house just as the movie for the kids ended. It had taken us over 2 hours to go the seven miles; most of it spent on the side of the mountain the first 2 miles from the house. We escorted her to the gas station in Galeton where potty breaks abounded as we had not planned on that length of time to take her out. She made it home to Indiana before the New Year taking her about 13 hours instead of the usual nine and collected a few stories to tell about the trip to Leetonia in the Winter. I wonder if they will come back this time of year again? Mountain girl, Paula, logging out.
Posted by eaglebear at Thursday, January 01, 2009

Wow sounds like you guys had a rough time with the weather... but I know mom had a great time see you.... who knows maybe next year I'll be able to make it down with them.
Megan Curtis

We have been home a little over 4 days now and are nearly recovered from our Pennsylvania escape. Hunter, Abby and Hailey are ready to pull up roots and move to PA,even if it means "home schooling". I can say I won't wait so long to visit again after seeing the impact it had on the kids. They were completely captivated by the awesomeness of the mountains. Thank you Paula and Leeann for generously sharing your mountain with us. TTFN Ruth