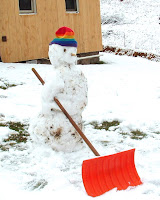 Leetonia, Pennsylvania. Overnight a snowman popped up in the front yard of Camp Eaglebear. The anonymous snowman was seen trying to clean up the mess he and his friends created overnight. It seems they tried to play a trick on Mother Nature and threw 2" of snow around they had been saving since December when they opted to let it rain for Christmas.

This has prompted Mother Nature to discipline the snowman by giving him a shovel and warming up the temperatures just enough to cause him to sweat. I am sure his punishment won't last long.

Meanwhile the roads are temporarily slushy and its just plain dreary. 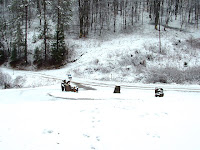 For those of you who don't live in Leetonia today you might just be lucky. Mountain Girl, Paula, signing out.
Posted by eaglebear at Thursday, April 12, 2007