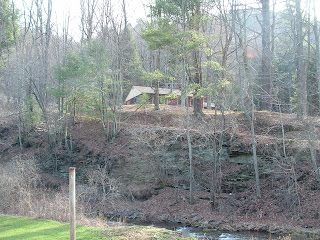 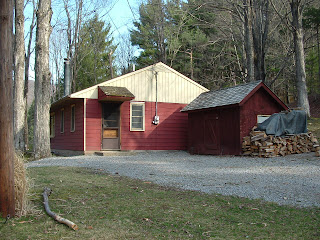 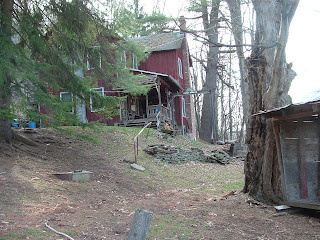 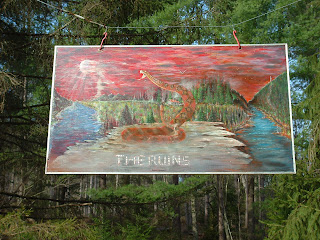 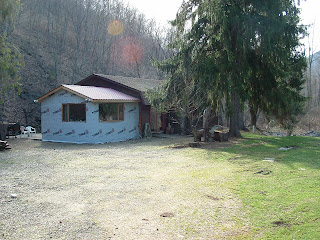 This is in response to a nice email I received from Peter saying he was enjoying the blog and recalling his time as a youth in Leetonia during the 70's.

According to Peter his family owned the cabin in the first two pictures, which is now owned by Cassels. Peter's memories are as follows:
Our cabin was built by my dad as a pre-fab home. As you drive up the very steep hill on the way to Wally's, ours was the first cabin on the right.....just above the Cassels (our relatives). It was red/rust with a small shed in the front that my dad built. It had a screened in back porch.

We would drive down from central New York often and enter from Ansonia. I remember how excited I'd get as we'd gas up at the Ansonia gas station before entering the forest. Writing about it now makes me realize how much I miss it, and what a special place Leetonia is.

I remember Dad had interviewed Leo Bailey, who had been born in Leetonia and he had given dad a, autobiography and pictures of Leetonia back in the logging days. On the quietest of afternoons there, I had difficulty trying to imagine how different Leetonia was in the early 1900's with barely a tree in sight.

Peter also recalled being nervous walking around "The Ruins", shown in the last two pictures because of the rattlesnakes in the old Tannery Foundations. I can tell you from personal experience his nervousness is well founded. I have seen two Timber Rattlers in that area one on the road going up to his old place.

If you haven't been up for a while you will notice the Ruins added on to their camp last year..the siding is still waiting to be finished. Also for all of you wanting more information don't worry there is a lot to tell about Leetonia. I will repost some of the stories I have had published in the near future on this blog. Until then, Mountain Girl, Paula, Logging Out!
Posted by eaglebear at Monday, April 23, 2007

Thanks so much for the entry! It's great to see the old cabin that I took my first steps in! I'd love to see some pics and entry of the old cemetary and runis of the old schoolhouse when you get a chance. Thank you once again!

Great site. I hunted around Leetonia & fished Cedar Run in my teens, stayed in "The Ruins" & knew Wally, then the only permanent resident. Wally would suplement his income by catching timber rattlers & harvesting their venom to sell to medical companies. He would bring the snakes over to the Ruins for us to see. Walley also taught me how to stalk the trout in Cedar Run. His skill at fishing was verified when he showed us his well stocked freezer packed with trout. He was one of those unforgetable people & I'm glad I knew him. I have many fond memories of the times spent in Leetonia. Thanks, Bob Weise