The Bonitz camp sits atop a hill called the "Boneyard". It was dubbed the boneyard in the early 1900's after all the bones buried there from the slaughter house. The camp was built in the 1950's on the site of the old school house. The school house was the second school in Leetonia. The first one was over on Francis Leetonia road in front of the graveyard.

Jack Bonitz who I interviewed for this story claims to have saved the bell from the school house. The Bonitz camp has been the stomping ground for many a hunter and fisherman.

animals inside. The bobcat, the dualing grouse, deer, bear, trout and a wall of squirrels that surpasses all others.

Jack says he has one of every kind of squirrel ever seen in Leetonia and I believe it. He also has two palomino trout his mother caught back in the 70's in Cedar Run. 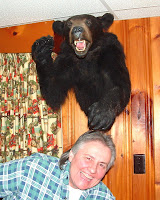 Last but not least is the bear hanging from the wall. This bear attacked Lee last year while she was cleaning(as reenacted in the picture). It left a hefty cut on her head when she came up under it. Just goes to show you bears are dangerous even when stuffed.

Well the big storm has not materialized into anything so far but a little snow and some wind. It always seems the storms that get the most talk produce the least and its the ones you don't see coming that leave you buried. I am not too upset to see the low snow amounts. Now if the cold would just leave we can get back to having Spring.

It would be nice to do a little something about each of the camps when people come up to camp let me know and I will come and write up a little post for you. Mountain Girl, Paula, logging out.
Posted by eaglebear at Monday, April 16, 2007